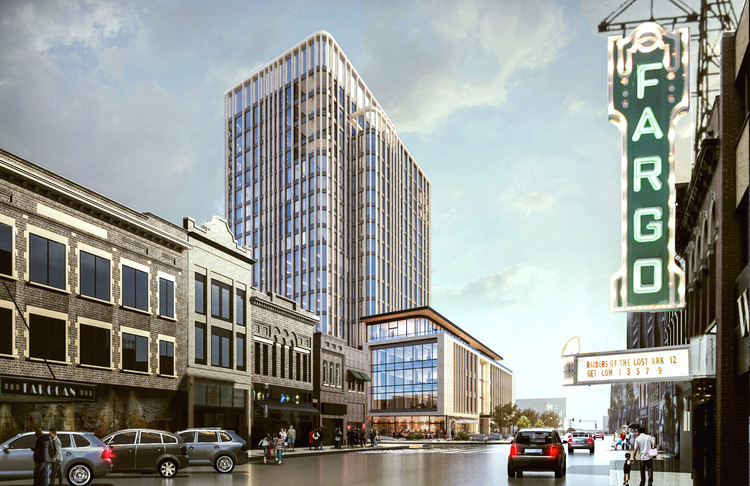 Mayor Tim Mahoney of Fargo, North Dakota, was joined by local civic and business leaders to break ground on Block 9 on September 12, 2018. Hoping to create strong retail and civic connections while activating the city’s downtown, Kilbourne Group began initial visioning for the site nearly 10 years prior. Mike Allmendinger, President of Kilbourne, note how “an incredible project team has developed, with each partner making the project better every single day with new ideas and passion for downtown Fargo. We are thrilled that the time has come to build, and excited for what Block 9 means for the future of Fargo.” Inspired by the agricultural and architectural vernacular of the Great Plains, Block 9 respects Fargo’s urban heritage while introducing new community spaces within the city’s historic streetscape.

Sited on a former parking lot at the intersection of Broadway, 2nd, and 3rd Avenues, Block 9 includes a five-story podium with new retail and dining spaces along Broadway, and a public parking garage at 3rd Avenue. Yhe project includes a new all-season public plaza for gatherings and events. A boutique hotel developed by Aparium Hotel Group will occupy several floors, with the highest floors dedicated to residences and condominiums. As SOM Design Partner Brian Lee has said, "Fargo is the future of great American mid-sized cities, representing a rich heritage and quality of life while fostering the opportunity to create a new urban story. With sensitivity to the history, scale, and rhythm of the city, Block 9 supports a vibrant, mixed-used program to strengthen the urban fabric and activate Fargo’s downtown area."

Block 9 was formed to create a slender tower profile on the Fargo skyline. At its base, the podium embraces the street and adjacent public plaza. A wood framed public arcade will open out to Broadway and function as the building’s main entrance. On the fifth floor of the tower, a wide outdoor terrace and glass-enclosed, multi-function ballroom and conference space will overlook the public plaza.

When completed in 2020, Block 9 will be one of the tallest buildings in Fargo. 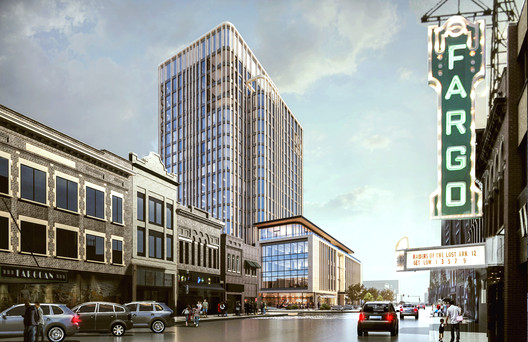