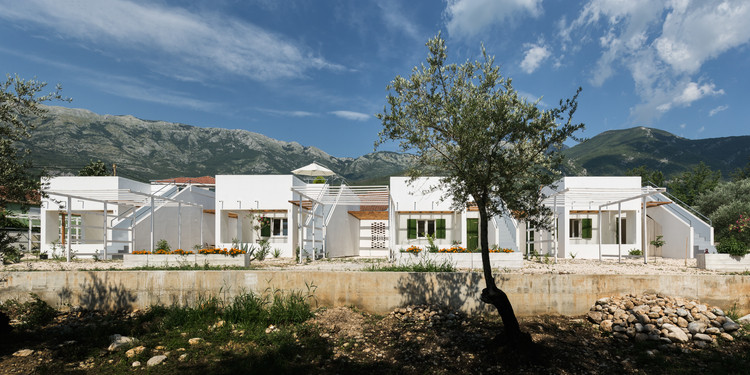 Text description provided by the architects. Four summer houses are set in Montenegro mountains, just a few kilometers away from the Adriatic sea. The project explores the potentials of open habitable spaces in relation to the common notion that only enclosed areas are considered as spaces to live in, occupy or own. As an innovative response to strict building regulations (minimal enclosed area required), AKVS architects turn the building inside-out. Instead of having many closed rooms and one open terrace, they designed one enclosed space and several open and semi-open areas, in this way blurring the boundary between habitable space and its natural surroundings, and directly engaging the architecture with its environment.

The ratio of open to enclosed spaces achieved is 3:1. The houses are built on one half of already occupied lot and needed to be oriented opposite of the existing building to maintain its privacy. Each house shrinks in width, so that the interior spaces open to both front and side, allowing natural circulation of air and penetration of diffuse sunlight deep into the rooms. Simple architectural gestures transform each weather situation into an immersive spatial experience. Open dining areas are located between the neighboring houses, oriented east-west so that the sun reaches the space both at the beginning and at the end of the day.

They are protected from the prevailing winds and overlook the wild landscape in the west. Summer rooms in the front are sheltered from frequent rain showers with polycarbonate transparent roof, but visually open to the sky,  exposed to zenithal sunlight and to the cooling sea breeze from the west, which makes them a perfect setting for sleeping under the open sky during warm summer nights, or for daydreaming during rainy afternoons. The roof terrace is completely exposed to the weather, offering clear views of wild vegetation, rocky mountains, sea horizon and the Island of Flowers ahead.

Blurred boundaries and intertwining spaces create gradients of privacy, from shaded and secluded interior areas to exposed panoramic roofs. The building can function as 4 individual vacation units, as well as one dwelling with a series of open spaces for socializing. The invisible spatial links achieved throughout the housing complex - visual, acoustic, olfactory and thermal - enable all the individual spatial atmospheres to mutually overlap and amplify each other. When living in such a house, one can hear people chatting on the roof, the outdoor shower running, barbeque in the front garden, plates rattling, all at the same time.

Unlike a traditional vacation house where people tend to separate into small groups and occupy individual rooms, the intertwining spaces create scenarios for spontaneous socialization among neighbors, resulting in unforeseen everyday situations, experiences, and friendships, which as architects point out, is what a summer vacation is really all about. The applied materials are simple and locally available - white painted walls to catch sunlight and express spatial depth with strong contrasts of light and shade, solid wood for lightweight canopies and window shutters, and local stone and gravel for landscaping around the houses. Mediterranean planting such as olive, fig, cherry and pomegranate trees, oleander, lavender, aloe, and rosemary have yet to grow and fully permeate the site. 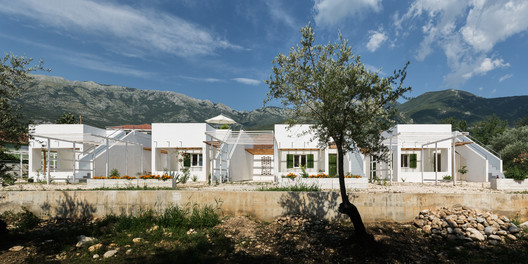