Australian architecture practice Bates Smart has revealed a plan to suspend a new Sydney stadium above central station. The design is a response to the New South Wales State Government and their proposal to demolish the main Sydney Football Stadium in the city's south-eastern suburbs and replace it with a new stadium. The new project would be a 45,000-seat stadium over the rail yards of Sydney’s Central Station that address the broad public opposition to the government's plan.

The New South Wales State Government has stated that their plan to build a new stadium on the same site would come in at a cost of $705 million. Hoping to avoid the use of government funds to demolish and rebuild, Bates Smart believes there are three main issues with the Government’s proposal: Moore Park Stadium is not well serviced by public transport, the redevelopment does not catalyze wider economic benefits for urban or infrastructural renewal, and Moore Park Stadium does not have the surrounding entertainment and hospitality venues to extend the game experience and maximize visitor expenditure.

Philip Vivian, Director of Bates Smart, stated that the "Coliseum in Rome established the concept of the stadium as a public space embedded in the fabric of the city; a monumental piece of infrastructure for public spectacle. In modern times however with the advent of the motor vehicle and the suburbs, stadiums became mono-functional objects, isolated on the periphery of the city and surrounded by car parking.Today a renaissance is underway, with stadiums once again being integrated into the city fabric and acting as catalysts of urban renewal."

Bates Smart outlines how the relocation of Moore Park Stadium to Central Station Railyards could have major public and economic benefits for Sydney and New South Wales. The argue that Central Station is the most accessible public transport node in NSW, and that a stadium over Central Railyards would create an ideal link between Surry Hills and Chippendale, The proposal aims to embed a stadium in the fabric of the city to create an urban spectacle and have the development rights for Central Railyards be provided in return for the construction of a new stadium.

The new suspended design also hopes to benefit the existing Moore Park. Bates Smart argues that the park can continue to operate during construction of the new stadium without interruption; and upon completion the Moore Park Stadium and surrounding carpark can be returned to public parklands. The move would restore Moore Park to its original size and replace parkland lost to the light rail line to benefit to the local community. 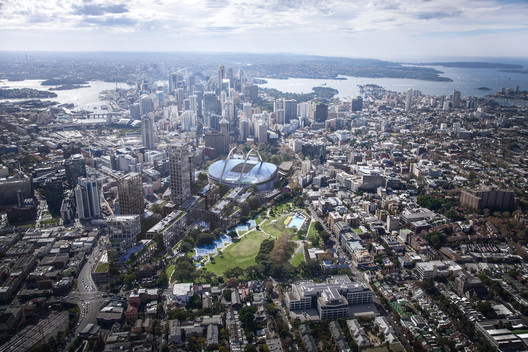