Save
Temple for the God of Wealth / CNRPD/Fuyingbin Studio 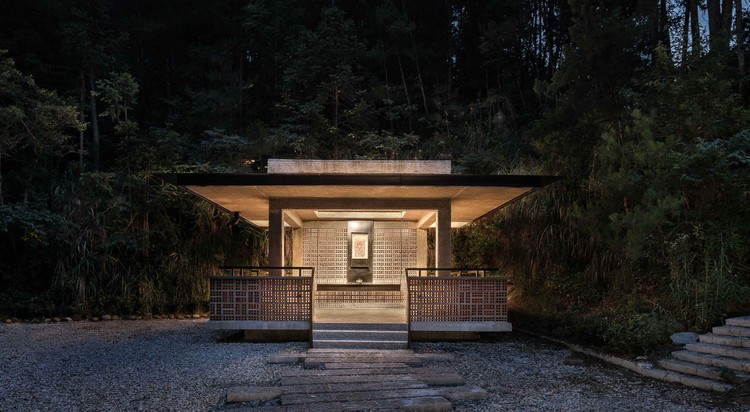 The origin
Sun Township is located in the heart of the scenic area of Dabie mountain in Huoshan county, Anhui Province. To support the travel industry, the local government had commissioned our team to design a square and a parking lot here. When the field engineering was almost finished, only a small temple had not been tear down completely yet. Such a small temple for the God of Wealth is quite common in surrounding rural area, it did not catch any attention therefore luckily it was not removed.

However, as the site investigation went deep, we found this temple quite special. It was nearly two hundred years-old, destroyed and rebuilt many times through history. Tiny as it was, the temple was a spiritual center of local villagers for centuries. We then convinced the client to rebuild this temple nearby, to continue local, traditional beliefs as well as to provide visitors an interesting interactive facility.

By this way, this temple became a self-proposed design task beyond the initial commission brief. We hope that through the design of this tiny facility, we can provide spiritual space for the villagers, and a dignified place for rural religious activities.

Proposal
The new site had been arranged in a ravine which is ten meters away from the original site, backed with mountains from three directions. The new temple should not only act as a sacred place of folk beliefs, but also serve the tourists and non-believers. The first problem to be solved is how to increase its publicity and interactivity. These local village temples used to be enclosed by mountains, ended up having very narrow space.

Considering the above, our design team tried to change the adducent spatial form of the former village temple, by introducing the form of a "pavilion" to open up the external space. Expect the necessary background wall for the shrine, we released and opened the space all the way around, with the roof stretching out soothingly, to create a comfortable space of contemplation, showing an open image toward the villagers.

Rural construction often faced the limitation of technology and materials. Although traditional material seems to meet certain aesthetics and values, the high cost and shortage of skilled workers made a less optimal choice. Therefore, we chose the most controllable concrete to construct the overall frame of the new temple, while inviting local bamboo craftsman to knit handmade bamboo woven mats as the lining of the construction molds, which gave the concrete a texture of bamboo mats. In this way we add to the cold modern material, concrete, the temperature of traditional craftmanship.

For the walls of the rebuilt temple we applied red brick, which used to be filling blocks rather than a presentation as the final exteriors. We transformed the usage of this common material by simply changing their direction, directly used hollow bricks to structure the masonry wall. The brick holes formed an unalloyed texture, making the scenery behind partly hidden and partly visible, blurring the boundary of the space. The square-shape opening of the roof adds to the religious atmosphere of the temple. The light ray dropping from the top moves slowly through daytime and illumine the statue at specific moment.

In south China region, water is a symbol of wealth. Many native buildings strongly emphasizes the role of rain in architecture. Thus in dealing with the roof drainage we especially considered this folk custom, did special treatment for the drainage system.Also inspired by the “rain chains”in Japanese traditional architecture, the design made rainwater discharge become a lively and interesting landscape, and a clever metaphor of "the God of Wealth”.

Custom
When praying at the temple, local residents not only burn incense, but also set off firecrackers, pine branches and paper money, etc. The government concerned the risk of mountain forest fire and environmental pollution, raised that if we could guide the behavior of villagers through design.

The hollow brick wall of the temple became a new type of blessing facility, where people can roll up the red paper written with blessing words then put them into the hollow holes in the wall. With the passage of time, the brick wall holes slowly become filled up with red paper, connecting the construction with its users, and creating a process of growth. In this way, the building itself and the belief activities closely unifies together.

Bell ringing is a very popular activity among the participants of religious affairs in China. Below the site, we designed a big bell. Thus people can ring for blessing after coming down from the temple. The ringing bell and the blessing wall become new hot spot of the temple for the God of Wealth, popular among both local residents and visitors.

Impact
After the completion of this accidental project, which was not originally commissioned by the client, it also achieved unexpected effects. The new temple of wealth retained and continued the belief center of villagers, which not only continue to be a place for villagers to pray for wealth and luck, but also became an interaction place for visitors and villagers to communicate with each other, achieving unique public attributes. The appearance of the new temple and the new way of blessing also refreshed the residents' understanding of these facilities, becoming a focus of attention and discussion by visitors, infusing new vitality to folk beliefs. 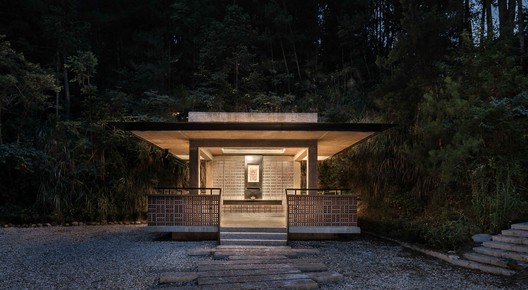