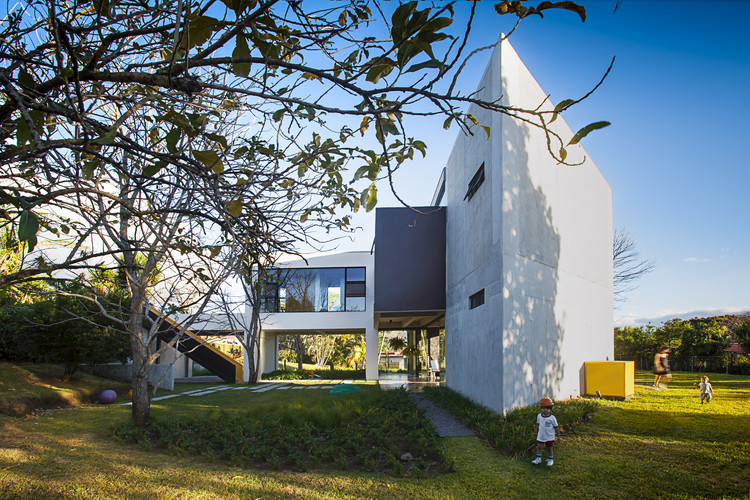 Text description provided by the architects. In a break in the city, the Menari residence is set, creating a respite for its inhabitants.

This project is constructed under a series of requirements according to the guidelines given by the client in relation to establish privacy in its immediate surroundings, which is why the morphology responds to this intention and the residence is self-contained, turning into a broad inner courtyard and projecting to the environment via a diaphanous plastic, characterized by pure volumes and solid in its majority, that establishes an interplay of full and empty through the perforations that allow you to peek inside towards the interior of the building, always having gardens as visual end point of the different spaces.

This is how its volumetric expression becomes imposing in a plain setting, under a geometric superposition of a trapezoidal surface and a rectangle, seeking the interaction of its simple materiality, characterized by the use of exposed concrete, glass and steel.

The project is located in a hot climate, requiring the consideration of passive strategies to generate optimal comfort, for which bioclimatic guidelines are established that range from the orientation of the house, closing towards the points of greatest solar exposure, and the use of cross ventilation with large openings to optimally ventilate the different spaces, as well as natural lighting in all of the rooms. It is also characterized by high ceilings and wide eaves, and the choice of specific materials to prevent overheating of the interior.

On a spatial level, a set of double volume space is created, provoking an intimate relationship between the exterior and the interior so that its neutral materiality allows key features to stand out, such as the floor of the social area with its mosaic of different colors, and the blue tinted wood floor in the private areas of the house.

Another distinctive feature are the large terraces that perforate the solid volumes, narrowing the visual relationship between levels, erasing the limits between the internal and the external, taking advantage of the fact that there are no hard edges, such that all spaces enjoy the advantage of the natural surroundings in which the residence is immersed. 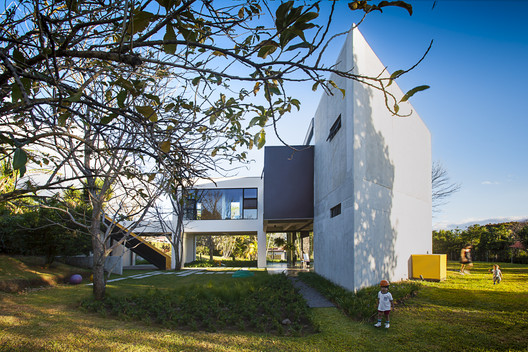