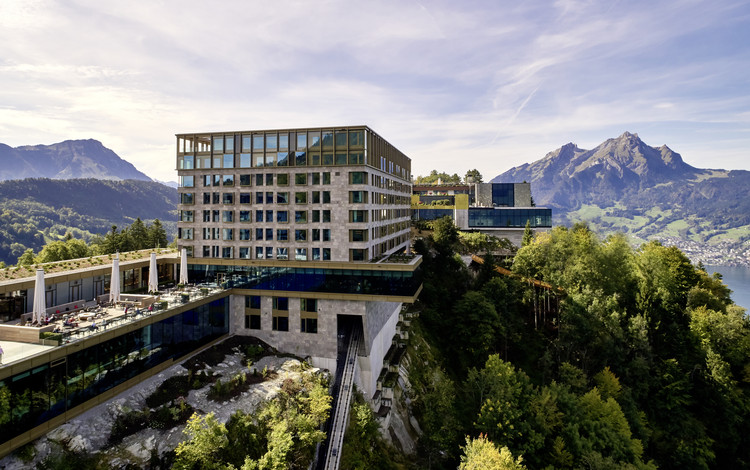 Text description provided by the architects. The new Bürgenstock Hotel 5* superior today forms the heart and the central attraction of the Bürgenstock Resort. The imposing building blends in naturally between the Hotel Palace and the Bürgenstock SPA and is aligned to the north towards Lucerne. The design concept for the new hotel and its interior is based on scenes from legendary films. With its “Gold-finger” planning design, our team from Rüssli Architekten won the 2010 Architecture Competition.

Concept and materialization
The overall hotel facility has been simplified from two buildings to one single, large, L-shaped building. This intervention created a spacious, public north terrace between the main building of the Bürgenstock Hotel and the Hotel Palace. The space between has a positive effect on the townscape. The unimpeded access to the terrace via the piazza affords spectacular views over Lake Lucerne.

The new hotel sits prominently on the Bürgenstock rock, 875 meters above sea level. The facade is encased in pale Sellenberg limestone and rises like a skyscraper above the glass base. With its grey-brown structure, the stone is similar to the natural Bürgenstock rock. The materialization of the facade picks up the themes of the hotel’s historical background and complements these with modern design. From afar, the building looks like it has been hewn from the rock itself. The stone facade contrasts mainly with the metal elements such as the post and mullion glazing and the punch windows. These are, just like the striking canopies, in an elegant bronze tone. The loggias are decked in thermal ash.

As a historical outdoor space, the piazza has been optimally integrated into the new boulevard and underscores the unique atmosphere. The piazza is a meeting place and destination with many possibilities for utilization. It can play host to cinema and theatre performances in the summer and, in winter, a Christmas market adorns the square.

The “Spices Kitchen & Terrace” restaurant with its Asian show-kitchen is adjacent to the piazza in an overhanging glass-enclosed space. Planned with 110 inside and 100 outside seats (North terrace) and with 18 lounge seats. Architecturally, the restaurant impresses with its unobstructed views of the lake. The interior design was conceptualized and realized in conjunction with the interior designers MKV London. The seating is arranged along the post and mullion facade and offers each guest the same view. In culinary terms, “Spices” offers fine cuisine with specialties from the Far East, all prepared authentically in the open show-kitchen.

With 102 luxurious rooms (standard and suites) extending over seven floors, this hotel will most certainly be a new hotspot for visitors from all over the world. All rooms face the lake and have a bay window as a central detail. The bathroom is connected to the sleeping area through a transparent glass sliding door. The bathtub offers – just like the bay window – a direct view over the lake. All rooms have their own gas fireplace, a wardrobe, a minibar, and a desk. The materials were selected to harmonize with each other and draw the style of the entire hotel from the public areas into the private ones.

The project team succeeded in creating a fantastic combination of Swiss tradition and the modern. The historical values have been maintained and the legendary history brought back to life. The responsible use of natural resources and the sustainable approach as well as the promotion of local businesses and the development of jobs were taken into account. 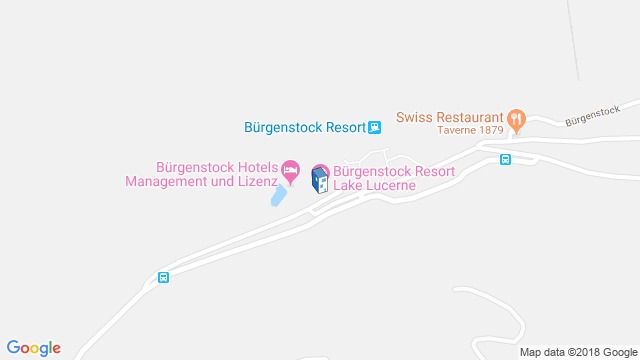 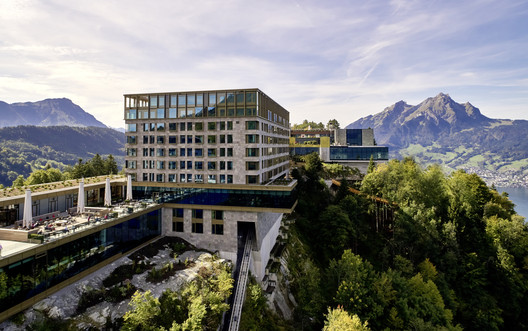