Summer at SCI-Arc is synonymous with Graduate Thesis. The culminating moment of both the M.Arch 1 and M.Arch 2 programs, Graduate Thesis asks students to come up with an original creative conjecture that proposes and defends a belief or position about architecture and articulate it through an architectural project. A few weeks ago, the school held its Miniatures exhibition at Hauser and Wirth Gallery and midterm reviews for Grad Thesis 2018. 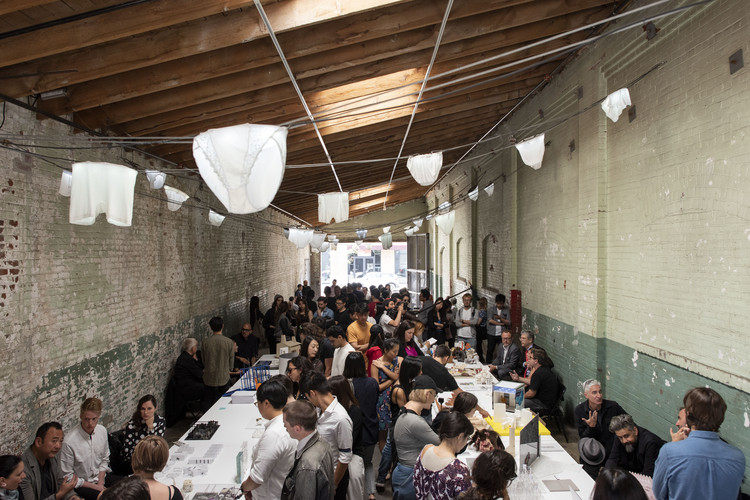 Among the projects for this year were a kindergarten inspired by molecular patterns of affinities (“Atelier of Error” by Eugenio Superchi @eugeniosuperchi); a residential project exploring the contemporary possibilities of extreme wall thickness (“FAT” by Melanie Haven Alcorn @melanie_haven); a mediation on “post-natural mysticism” inspired by the Dada and Surrealist projects of the early 20th century (“An Atlas of Endless Mythologies” by Jackson Lukas @jackson8000000); a new take on the mat building typology (“This is Matness” by Ashley Hastings @utilitas_firmitas); a United States embassy prototype that shifts its relationship to its ground plane based on the political conditions of various host countries (“An American Power Box” by Andrea Cadioli @theblondecadio); a facility for developing, growing and enjoying cultured meat set in the agro-industrial landscape (“Moosphere” by Frank YT Chen @Tw78franko); a fresh exploration of vernacular aesthetics for a civic center in Downtown LA (“Formless” by Abagael Warnars @abby.eli___); and a science-fiction-inspired supersized opaque urban mass that contains a series of distinct ecosystems within (“Ark” by David Lin).

These projects investigate the architectural potentials available in the contemporary socio-economic, political, and ecological landscape via the emerging digital techniques and design sensibilities that set SCI-Arc apart. Although they all respond to technical and practical considerations, each thesis contains a speculative disciplinary focus aimed at challenging assumptions about the status quo and increasing architecture’s cultural leverage.

“Atelier of Error” by Eugenio Superchi @eugeniosuperchi plays with the notion of error to reimagine space itself as a kind of teacher. Alcorn’s “fat” walls invert typical notions of solid and void and elevates the “poche” space of insulation cavities, plenums, and structural thickness. Lukas’ weird architectural objects are mesmerizing mutations of animal forms and patterns native to the regions in which they are set – new totems glowing with indeterminate meaning.

Hastings’ project challenges traditional visions of vertical density with a more democratic and environmentally friendly horizontal urbanism. Chen’s Moosphere radically contests our current food-production system of ranch-feedlot-slaughterhouse while reclaiming the rural hinterland as a site for architectural and urban speculation.

“An American Power Box” by Andrea Cadioli @theblondecadio comments on the U.S.A’s changing status in the world while enacting various possibilities for its future. “Formless” by Abagael Warnars @abby.eli___ is a civic center proposal for downtown LA that productively challenges academic traditions of formalism in favor of more diverse yet equally rich vernaculars. “Ark” by David Lin raises the possibility of altogether new scales and programs for architectures of the future.

SCI-Arc’s Graduate Thesis students will continue to refine their projects over the following weeks as they prepare for their final exhibition during Grad Thesis Weekend. Keep up with the progression of Grad Thesis projects by following @sciarc on Instagram or the students’ accounts.