Studio Gang 10-story Solar Carve Tower is nearing completion in New York’s Meatpacking District. Officially named 40 Tenth Avenue, the scheme responds to the Highline and surrounding site with a dramatic curtain wall and chiseled shape. Sculpted by the angles of the sun, 40 Tenth Avenue explores how shaping architecture in response to solar access and other site-specific criteria can expand its potential to have a positive impact on its environment.

New photography by Tectonic reveal the latest progress photos from the Solar Carve Tower. The photographs show how the play between the project's curtain wall, light and the Highline. Located at the edge of Manhattan between the High Line park and the Hudson River, the building takes its unique form from the geometric relationships between the allowable envelope and the sun’s path. The design sought to preserve maximum access to light and air, with the building’s form “carved out” to create a scheme narrower at the bottom than at the top.

40 Tenth Avenue is being co-developed by Aurora Capital and William Gottlieb Real Estate. The project is scheduled for completion in March 2019. 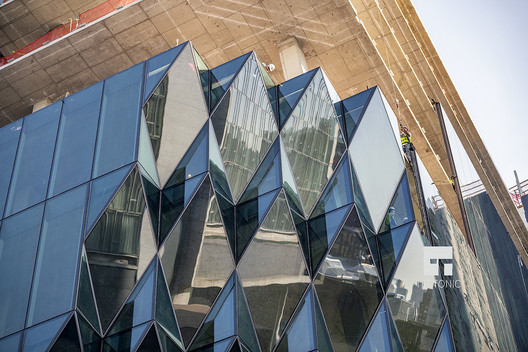