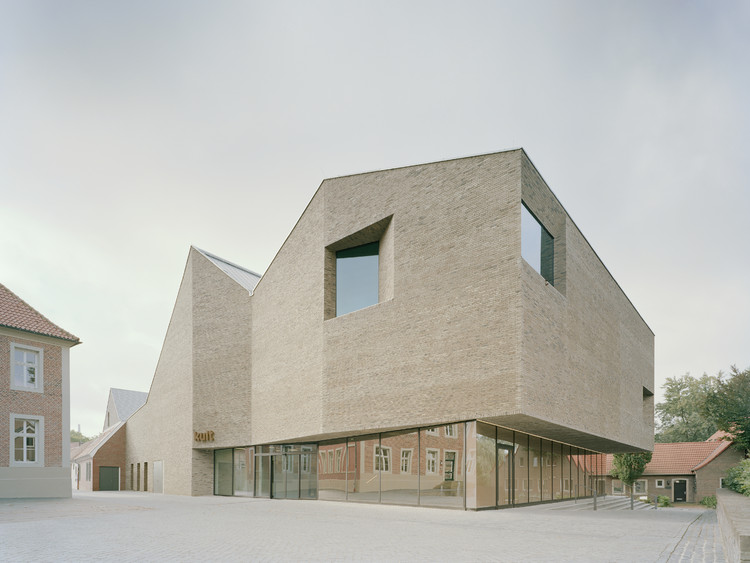 Text description provided by the architects. The kult is a new cultural hub for the town of Vreden and a vibrant focal point on its cultural route. It combines a 1.400 sqm artistic-historical museum with the cultural administration of the district, the local archives, an educational space, a city market, a shopping area and spaces for events and temporary exhibitions.

The centre aims to walk the delicate line between sensitively integrating itself in the medieval heritage and establishing a contemporary landmark that actively contributes to Vreden’s cultural and social life. Its sculpturality is directly developed from the context, extending the small-scale structure of the housing along Vreden’s medieval wall and defining the town's edge.

A new urban cultural route begins in the town surroundings and enters Vreden over a moat and through the kult: it is in its atrium that the route intersects with the building's central and vertical axes, the latter leading up through a sculptural staircase into the museum areas. From this point the visitors have a clear overview of a complex ensemble and functions.

The staircase itself is not only a distribution space for the different exhibition areas but is also the representative backdrop of the atrium, which is also used for conferences, festivals and concerts. In total, two new bodies have been added to the four existing ones, shaping a complex that covers a time span from the 14th century to the present day. In particular, the 14th and 16th century listed buildings constitute a rare example of pre-war architecture in the area.The two buildings from the 70s and 80s, formerly the old Hamaland Museum, are bound together with educational areas and with the continuation of the roofscape.

To preserve the legibility of the historical layers the facades are subtly shifted and detailed to recall the original styles, while the different blocks are clad with local bricks that gently change in colour shade. The result is a coherent ensemble that nevertheless frankly declares the juxtaposition of the diverse identities, which harmoniously coexist without challenging each other. If the outer cladding naturally blends into the almost rural surroundings, this is peeled away on the inside to reveal the concrete structure in raw timber texture.A fresh and contrasting character is also added by vivid yellow accents, like shop fronts, along the central backbone axis, binding the museum’s ancillary spaces, the two reception areas and the archive.

Central openings in the atrium and the courtyard provide a well-balanced natural illumination besides identifying the different museum areas and facilitating the orientation within the centre. On the first floor the central staircase leads to the secular part of the exhibition where corner windows open on to the view of the medieval port, the source of Vreden’s economic importance of the time. On the second floor, the clerical part of the museum, the stair points to two windows on the north side, displaying the town’s two churches, which still dominate the Vreden skyline. 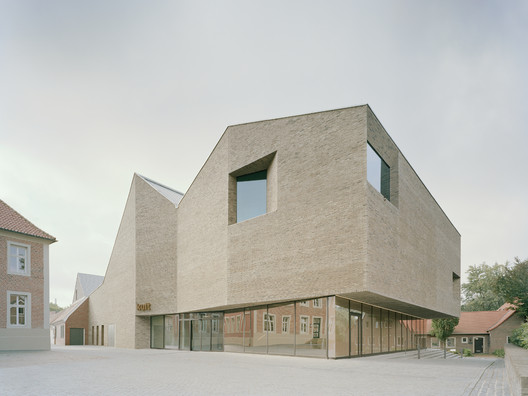