The Panama Canal is to soon celebrate another milestone in its long history, with the imminent completion of the what will be the longest concrete four-lane cable-stayed structure in the world. With a 1750-foot (530-meter) central span, the Atlantic Bridge will connect the banks of the canal’s Atlantic Ocean entrance when it opens in early 2019.

Construction of the bridge began in 2013, in an effort to connect the seaport of Colon to communities west of the Canal. The bride was designed by the China Communication Construction Company consisting of HPDI and Louis Berger Group. 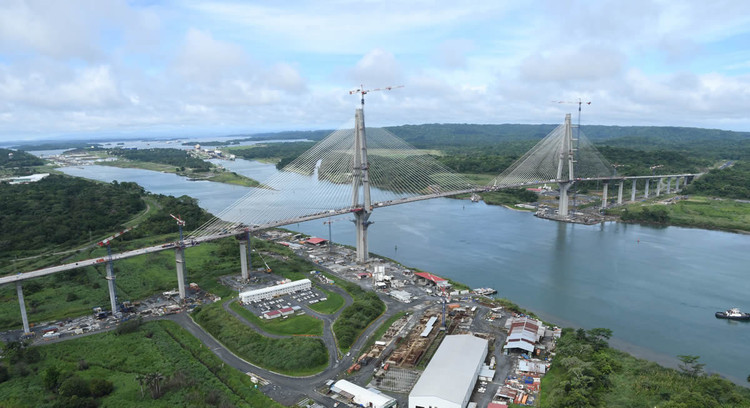 Given its position at the Atlantic entrance to one of the world’s most crucial shipping routes, the bridge has been designed with a 250-foot (75-meter) clearance to allow Neopanamax containerships to pass underneath. Above, a four-lane passing for cars, pedestrians, and bicycles will be supported by double-plane cables anchored to two delta-shaped main pylons reaching 695 feet (212.5) meters in height.

The bridge has been constructed using reinforced concrete, departing from the typical steel construction technique used in modern bridges of this scale. The material was chosen due to its resilience in the region’s highly corrosive environment.

When completed, the Atlantic Bridge will be the third bridge over the Panama Canal after the Bridge of the Americas and the Centennial Bridge, both of which are on the Pacific side of the canal.

The bridge on the Atlantic side of the #PanamaCanal is about to be stitched together! The bridge will speed traffic and help the region’s development. pic.twitter.com/JwLKDL8oxC

Click on any of the images above to access the full gallery of the Atlantic Bridge nearing completion. 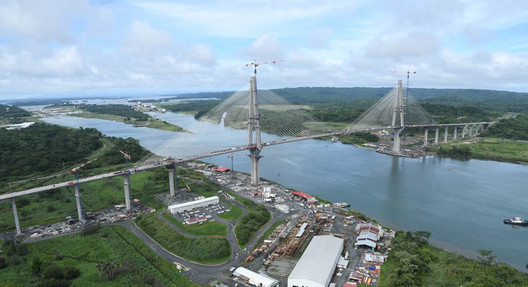