The IMPACT Centre manifests as three compact, intersecting volumes. A central concert hall sits within an oval volume, crafted for optimal acoustic performance and topped by a shallow dome. The scheme’s overlapping lower orthogonal volumes house ancillary and public functions, including a 200-seat studio for performance, recording, and rehearsals.

The order and materiality of the exterior facades draw inspiration from the architecture of Edinburgh’s Georgian New Town. The typical expression of a base, middle, and top in neoclassical buildings is communicated in the building’s massing while the texture and tone of the New Town are conveyed through various sandstones and a metal-clad dome.

The scheme’s program is vertically arranged with the main concert hall lifted off the ground to create an entrance level underneath. With three entrances addressing different approaches, the expansive ground floor increases permeability across the site while uniting the diverse urban conditions surrounding it. The foyer is envisaged as a “new public room for the city” outside of performance hours, encompassing public functions such as information, ticketing, a café, and an informal performance and exhibition space.

A foyer staircase will connect the ground floor with the main concert hall upstairs, or the studio at basement level. Corridors will wrap around the auditorium at each level to provide access, acoustic isolation, and breakout space, while at the upper level, a colonnaded promenade below the dome will offer 360-degree views of Edinburgh.

Chipperfield won the competition for the scheme's design in 2017. The IMPACT Centre is expected to be completed in 2021. News of the design comes weeks after Chipperfield revealed the design of their new addition to the Turner Contemporary Gallery in Margate, England.

Share
Or
Copy
About this office
David Chipperfield
Office
••• 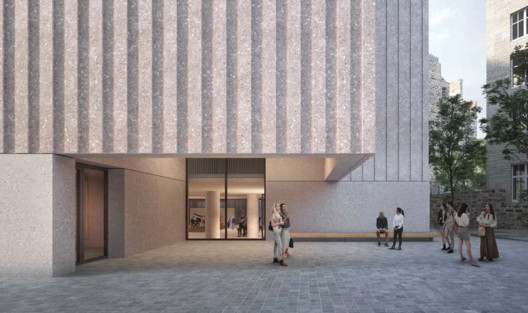