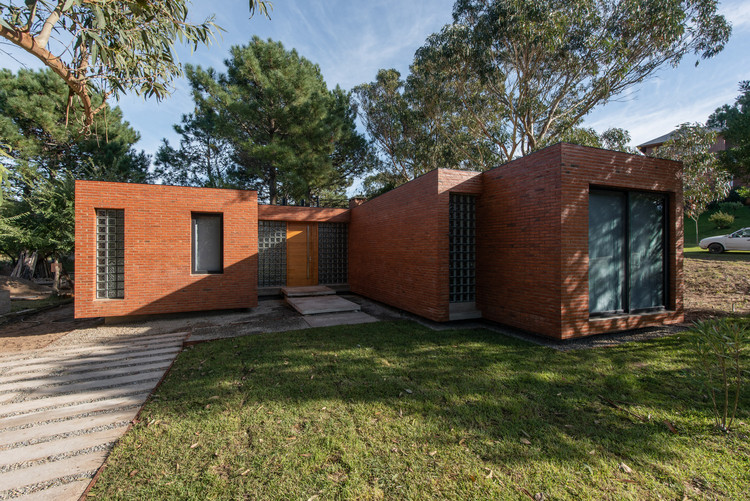 Part of a whole
Rincon House is the first of a group of rental houses located near the beaches of Ostede, a historical coastal town which used to experience a time of great splendour.

The town gradually lost its condition of vacation cityto the neighbouring cities of Pinamar, Valeria del Mar and Cariló. Ostende thus turned into the city with the largestpermanent living population –mostly, working class- of the County.

Its geographical, historical and social featuresare portrayed in an architecture that reflects contemporaneity with signs of formal and material austerity.

The main challenge was to project six houses in topographically varied adjacent lots within a hybrid concept that highlights a single-family house in an independent lot at the time that specific conceptual characteristics reinforce the idea of the whole.

Typological reformulations
The house forges a bond with its surroundings. The existing residences represent the popular brick chalet of Pinamarof the ‘80s and mid ‘90s characterized by a principal body withexposed raked-jointbricks, wood millwork and big slopedroofs. Rincon House redefines this style and adjusts the materiality to current technology.

Intended for a generic user, the house minimizes the bedrooms area so as to maximize the resources used in the meeting and leisure ones. The barbecue area closes the living/dining room area at the time that works as an interior/exterior nexus, deconstructing –gradually-the architectural box.

The non-built void as the main space of the project
The house hallmark allows to cut the lot in portions on both sides, and thus creates a constrained space of ownership to the rear façade and a containment of the main access.

The space on the rear façade is an important aspect of the project, both to the individual residence andto its concept as part of the whole. This space consists of a garden of aged trees –rare in a sand dune environment- which was left unaltered to provide a ‘natural shelter’ for leisure. The form and location of the house closes views from the two streets.

The house as a contrast between nature and artificiality from a formal and chromatic stand
The house lifts off the ground creating a sensorialdynamism at the time that prevents the erosion of the masonry when it touches the ground.

The need for privacy in the bedroom turned out in an articulated proposal:a partition of the programme maximizing the perimeter and focusing on the sunlightand views from the fenestrations. In other words,a stratified volumetric scheme opened on its longitudinal side and closed to the busiest street and future neighbours.

The double slop on the roofs opens the space to the exterior, maximizing the entry of sunlight during the morning and afternoon.

The materiality was selected -after varioustestings- for several reasons. First, its monolithic appearance creates a formal simplicity of great visual value. Furthermore, the fact that local craftsmendominate the masonrytradecontributed to the choice of common bricks as the main material in the construction. A double bearing wall made of common brick with air chamber solves the thermal, waterproofing and structural needs of the project at the time that reduces the cost of maintenance to the minimum.

The different brick bond types create games of lights and shadows, hideservice elements –such as air conditioning condensers- and resolvedifferences in boundaries, porosities and reliefs without losing its formal chromatic homogeneity.