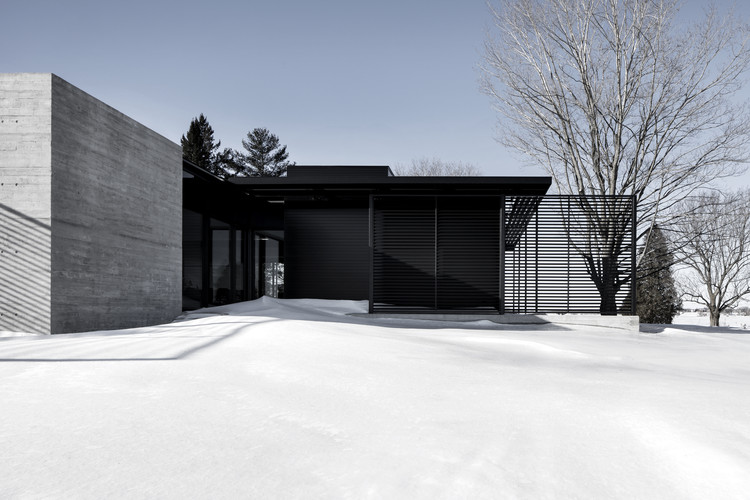 Text description provided by the architects. Artificial landscapes of the Saint Lawrence River
The project’s conceptual narrative for this private home is based on a critical analysis of its surrounding. The narrative calls for a broader approach to architecture as an unstable figure between landscape and art. The area of the city of Cornwall (Ontario) has been dramatically modified in the mid-XXth Century with the construction of the great St Lawrence Seaway, which would open up the river to commercial navigation and allow new power dams to be implemented.

This operation caused the relocation of the residents of six villages and three hamlets nearby while completely reshaping the shoreline of the St Lawrence river. Moulinette Island, where the project is located, is part of a chain of small "islands" formed from the flooding of the dam. More precisely, the lot where sits the project was shaped from a residual partitioning of a generic plan of development allowing for a large waterfront that emphasizes the horizontal lines dominating the landscape. These men- shaped coastlines, leveled by the flooding, consequently induce very strong wind conditions for this unobstructed plan of artificial landscape.

Architecture as an artificial landscape.
The proposal adopts a bold and critical reasoning of all these paradoxes, where the site although stunning is, in reality, all but authentic, raising the question: What would be a respectable approach to context, when all nature components around are actually fabricated? As willingly addressing this state of being, we approach the site in all its artificiality in order to re-inscribe the human experience in the most straightforward way possible. The program of occupation was set up not in relation to any suburban prerogatives but rather from a logic of interactions for the anticipated functions of the house. This suggests a composition set to follow the axis of the cardinal points, detached from any generic street alignments.

Therefore, the project proposes a direct relationship to the sky, horizon, and wind rather than its immediate suburban surrounding. The plan is conceptually developed as a maze of spaces interconnected by voids that act as small-scale spaces (or subspaces) procuring micro-spaces that can be recuperated by the inhabitant: Small inner courtyards blocking the winds, semi-open spaces protected from the rain and spaces lit from the sky marking specific areas. These features, along with generous portions of glass opening up on the horizon, blur the boundaries between interior and exterior to provide a complex relationship with the landscape, amplified by the many artificial reflections of the glass or metal surfaces. In a way, it sets the house in an unstable condition of permanent reshape. It becomes a device to perceive the landscape rather than a fixed, self-referenced architecture.

Ephemeral and Perennity
As an analogy to the transformation of the landscape by humans, the project also introduces temporality: Permanent components of the house alternate with more ephemeral ones. The outskirt of the house is delineated by permanent boundaries in concrete (linked to the legal occupation of the site) while the house itself could have more flexible or ephemeral construct in metal. As if the house would anticipate its own transformation within an invariable boundary. These opposites are inherent characteristics of any built form, set between immutable parameters and ever changing ones. The house assumes this unstable position and anticipates, in its structural details, the imminent changes that occupation will provoke. 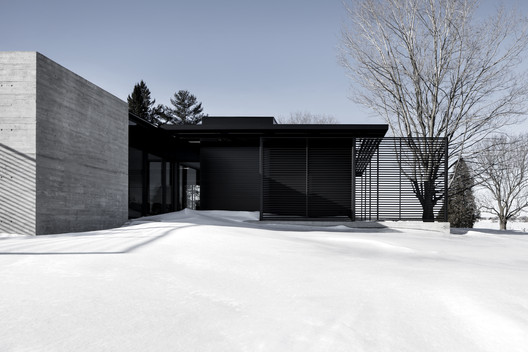