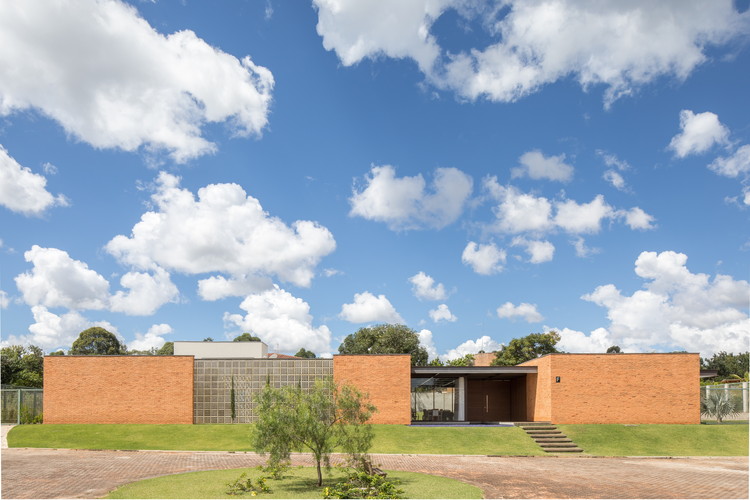 Text description provided by the architects. A wide, single storey house, which should be well illuminated, ventilated, opened to the garden and  also have privacy from the neighbors. In addition, it should become two independent homes, one for the oldest son and the other for the rest of the family. These were the requestes from our clients when they searched for our office. The building sit has a rectangular shape with 2500 square meters and it is situated at a calm and beautiful residencial neighborhood in Brasília-DF.

As the building sit has 55 meters wide, this was one of the starting points of the project, since it guided for a more elongated implantation. The plan was developed along two main circulation axes, in the longitudinal way there is the private areas and in the other way the social area. As the topography of the site was very smooth, it let the house be situated at just 1 meter high from the street, which resulted in a very plan design, with very integrated spaces, where the social area and the garden  become almost one great space.

To implement the project it was defined a square grid of 2x2 meters, with all the rooms, intern gardens and circulations. Where the two circulations axes meet there is the living room, which also includes a dinning room, a barbecue place, and a intern garden, which are marked by the apparent metal bins and the concrete slab. This social area works like the heart of the project, because it connects all the other rooms. On the right, there is the home theater, the bedroom of the oldest son, with a bathroom, his own garage and an extern bathroom. On the left, all the other rooms, the lavatory, kitchen, laundry, an office, another intern garden and the second garage.

The water is in the core of the house, on the entrance, beside the dinning room and in the other side, also in the swimming pool. This is very crucial for the Planalto Central climate, as for almost six months of the year it doesn’t rain, and it is as dry as a desert.

Intern gardens and a semi open wood panel were distributed along the house plan, which is crucial to promote a better natural ventilation and to bring the natural light everywhere along the house. The principal facade is oriented to the sunset, that’s why it was chosen not to use any opening in this facade, except in the kitchen, and in the laundry area which is protected by the semi-open concrete elements (cobogós).

All the bathrooms have natural light and natural ventilation coming from the skylights, and each one of those has a different trapezoidal format, in a way to allow the better use and  distribution of natural sun light.

The finishing elements used were the apparent steel structure, with the also apparent concrete slab, the concrete floor in the living room and circulation areas. To oppose to the cold and more industrial exposed materials, the natural "amendoim" wood floor were used in the bedrooms. And the raw bricks were used throughout the living room and on the principal facades.