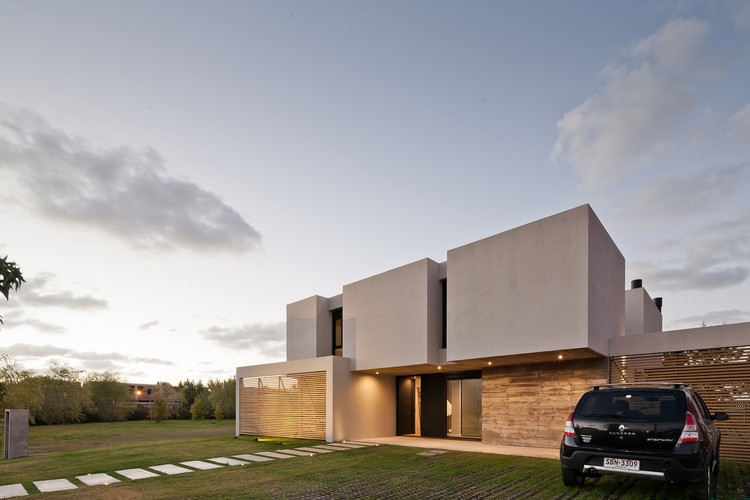 Client
The client is a young couple with two small children, the order: their first house built, own, made to measure and for life. They wanted a house of "unique space" integrated and flexible on the ground floor. A large kitchen, a living room with double height, a wild space that at times could operate as a desk, be daily or projection of the living room to expand your area in special events. An interior patio and an isolated battery of services. Upstairs the private rooms highlighting the main room above the rest, with en suite bathroom, dressing room and own terrace.

Spatiality
To the client's premises we decided to add some adjustments that would enhance spatial sequences capable of stimulating the uses by manipulating the flexibility of interior expansion-segmentation without difficulties and moving away the result of a too geometrical functional schematism. The first incorporated the exterior - interior transition through the contained space by the projection of the volumes of the second level, generating two eaves of reception - extension of the interior space to areas sheltered from the sun and rain, a covered entrance to interact with the street, pergola and barbecue to interact with the patio and pool on the background. Semi-interior areas that considerably amplify the area of ​​use of the house.

Once inside the circulations revolve around the inner courtyard and the staircase, which opposes the main entrance of the house with its back, to connect the upper floor with the living-dining room directly and thus dilute the perception of "passage space" " At the same time, the superposition of the windows that accompany the entrance ensure the full thickness of the ground floor and its operation to the later limit of the property.

The second corresponds to the double main height located above the living room, to which the kitchen and the living room are linked by means of sliding enclosures capable of isolating and unfolding the social spaces to generate the intended flexibility. The upper floor is incorporated into the system through an interior balcony that ends its circulation on a small entrance hall to the main room.

Material
In the selection of the palette of materials, it was prioritized to promote a language of expressive and robust character from the textures and own colors, which generated coherence between the different surfaces worked. In this way, the exposed concrete was used as a common factor of the whole proposal, varying between polishing with a helicopter, hand-polished concrete and different arrangements of exposed concrete planked. The outer shell is composed of a double brick wall, which only unveils its composition in a portion of the main double height where it was decided to maintain the texture of the bearing brick in plain view without being plastered. Surfaces of white marble, wood and brick complete the final composition.

For the structure we decided to work with the greatest absence of beams and pillars possible in favor of reinforcing the flow sensation expected in the plant. The eaves of exposed concrete that reach 4 m without support towards the backyard complement the spatial continuity towards the exterior. Finally, the windows on the ground floor take off the second level to look for a formal illusion; the second level "levita" on large glass surfaces.