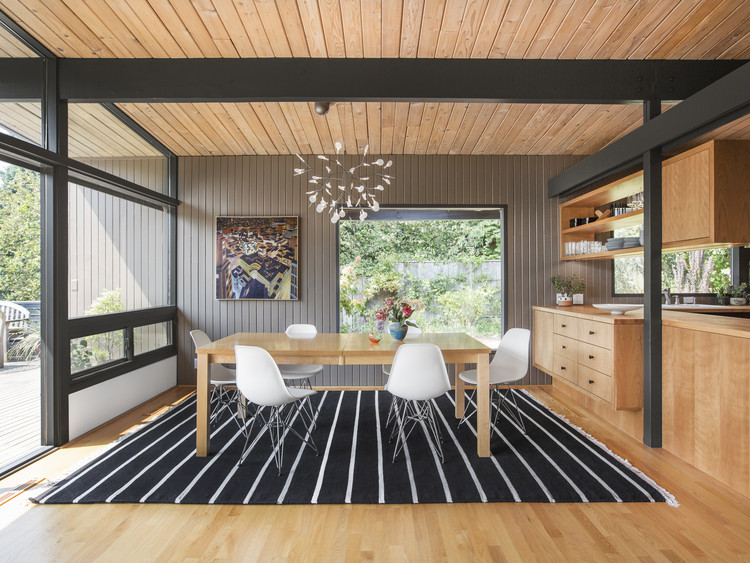 SHED Architecture & Design, together with interior designer Jennie Gruss, gave this 1957 midcentury home—originally designed by PNW architect, Arnold Gangnes—a fresh update for a young family in Seattle, Washington. The design team set out to restore the home’s midcentury elements back to their original intent, while also integrating some of the firm’s own modern details.

Originally, the two floors of the home were mirrored, which was a common architectural approach in the 1950s. For this reason, SHED did not make any major structural changes but instead updated the kitchen, bathrooms and bedrooms to better align with the family’s living patterns.

On the main floor, the unifying strut provided lateral strength and a datum line that organized different passageways from the entry to the kitchen. The kitchen was updated with Maroon laminate cabinets from Beech Tree Woodworks because the homeowners wanted a pop of color. The hardwood floors see in the living room and dining room is original as well as the green slate floor in the entry but flooring was replaced elsewhere in the house.

The master suite, originally two bedrooms, was modified by transforming one of the bedrooms into the master bath, which features a floating vanity and open shower. The homeowners wanted a powder room on the main floor but there were space limitations so SHED created a separate toilet compartment off the master bath to serve both uses.

On the ground floor, SHED modified the entry from the garage and created a dedicated mud room using a wood screen (designed in house) to separate the flex/bonus space from the entry without inhibiting light. They also transformed an old tool shed into a pool—one of the homeowner’s goals—which was challenging due to the limited footprint. 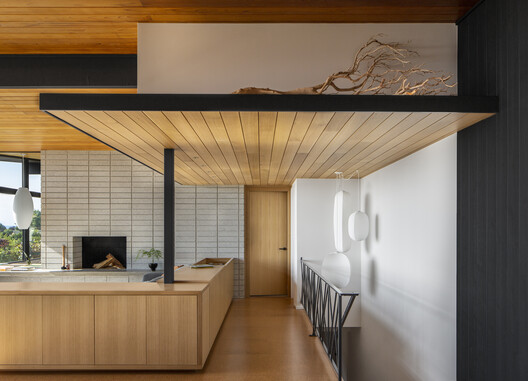