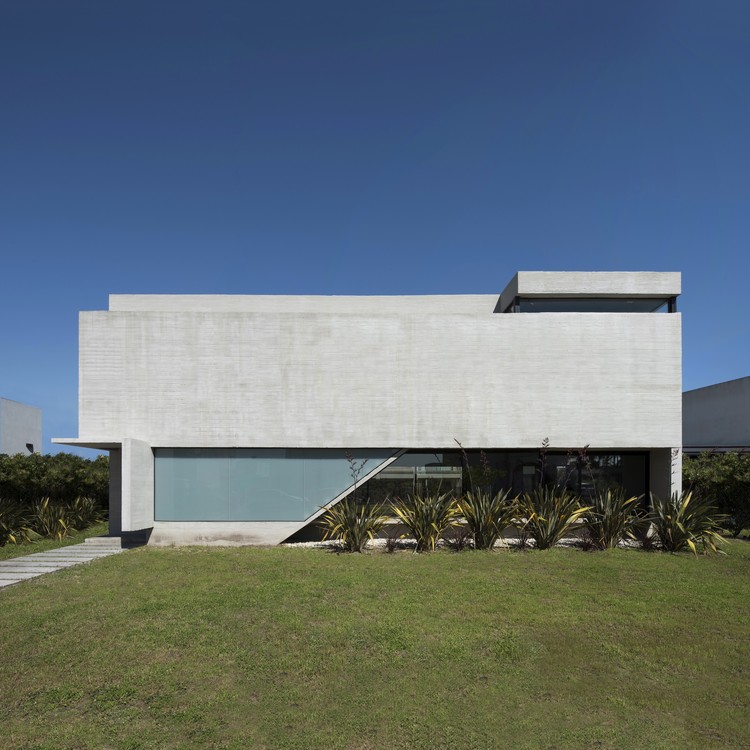 Text description provided by the architects. BLQ House is located in the Nuevo Quilmes gated community, on the kilometer 17 off-ramp of the highway that links the cities of Buenos Aires and La Planta.

Being so close to the center of Buenos Aires, the community shows an average urban density and its plots of land are relatively small.

Originally free of vegetation, the lot is an irregular quadrangular polygon, with a diagonal line parallel to the street cutting its front.

The commissioner, a couple with two children, asked to have their permanent residence built by the Studio, and requested that it should include an en suite master bedroom with its dressing room and two secondary bedrooms sharing a bathroom. The program also called for a studio linked to the social areas of the house and that the father would use his working space. The family expressed their desire for the house to have a generous outdoor gallery equipped with a grill. Special emphasis was put on the fact that the house should be sheltered from the street and look out for intimacy in the private areas.

The Studio designed a single exposed concrete volume occupying the site’s maximum building width longitudinally and whose shell would open towards the green space at the back of the site.

Organized at the front of the house, the spaces housing the entrance area, circulations and washing rooms separate the street from the nobler programmatic uses set on the rear and endowed with openings towards the sky and the garden.

Not only did the concrete’s structural system serve the house as a supporting skeleton, it also functioned as a space organizer.

Set longitudinally along the volume’s length, two parallel continuous beams support the slab over the ground floor, and the same structure is replicated over the first floor. Blind walls at the sides of the house both provide privacy to the inside and underpin these wide spanned beams. While allowing greater freedom when designing the front and rear openings, the rigid frame structure configuration of the house makes it possible to generate a big free floor plan central space housing a unified living room and dining area. Being also a beam, the great concrete cover on the front of the house permits transparent openings on the ground floor, allowing visual fluidity between the garden and the street. The private rooms on the first floor are strongly related to the outside through their glazed surfaces, and the master bedroom expands towards a private outdoor space with generous views towards the garden.

Regarding passive solar control, the concrete cover on the front thermally protects the southeastern side of the house, the least sunny one. On the back, above the outdoor expansion of the private rooms, while a series of vertical cantilevered partitions function as shades that shelter the inside against the sunlight from the west, a horizontal eave that goes all along the house’s width protects them from the north sunrays. This outdoor expansion on the first floor acts as roof for the gallery downstairs. Being a transition between the social areas inside and the green space outside, it graduates the passage from one sector to the other, at once protecting the inside from the outside weather and allowing social activities in a sheltered outdoor space.

Clarity in the house’s tectonic means, simplicity in its construction and purity in its materials were aimed at. The use of concrete made it possible to organize, expand, fluidify, free, and open the space as well as link it with its surroundings. Following Mies’s conception of architecture as the expression of structure, the house’s supporting skeleton and its spatiality were integrated into formal unity.