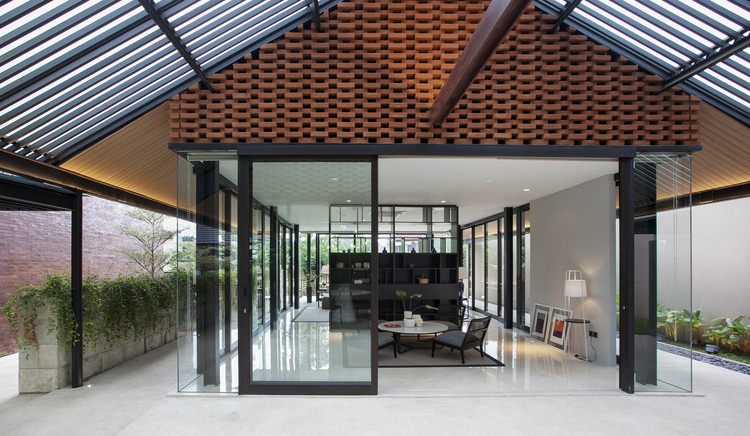 Text description provided by the architects. Located in Araya - Malang , the site has a potential view to the golf course and has a green environment. Wish from the owners to have a 1-storey residence with many terraces and openings to maximize natural air circulation and natural light, supported by air quality and temperature in Malang. Roemah Kampoeng becomes the inspiration to create a dwelling that reminds the childhood of the owner where the outer space and space are unity.

The house is divided into several building masses based on zoning in Traditional Javanese house, namely Pendopo, Peringitan and Omah. Pendopo and Peringitan is a public space used as living room, dining room and study room. The use of glass on the entire wall makes inside and outside space has a strong relationship. Omah is a private space used as the master and children bedroom, are placed behind the site. Privacy and view to the golf course make this area has a calm and comfortable atmosphere.

Massing concept of Roemah Kampoeng is divided into several building masses that separate each other, allowing openings all over the façade. The public area is placed on the front , while the private area is placed on the back of the site. Service that don’t require a view are arranged vertically  to maximize green areas. Building mass orientation is rotated 100 to the site.

Building mass composition creates a dynamic outdoor space resulting in a wide & narrow and also high & low scale. High scale are created at the entrance area, while low scales are created on terraces, corridor and inner spaces. Entrance is formed between 2 mass of building with wide scale which gives the impression of open and change to narrow scale when start entering private area.

Foyer and semi-open space created between buildings used as a bale to receive guests and gathering. The semi-open space and corridor that formed between the mass of this building create a sequence of gang that strengthen the atmosphere of kampung.

Roemah kampoeng uses columns and steel beams as structural elements, then windows and glass are used as building envelope. The house is made as light as possible to create the character of a Roemah Kampoeng with its gable roof and exposed structure. 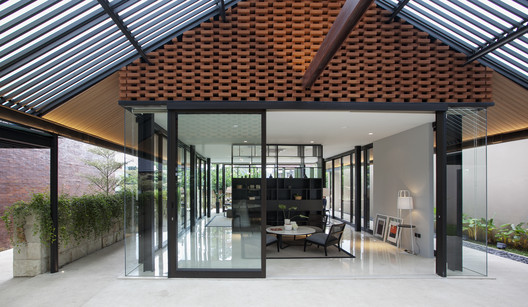