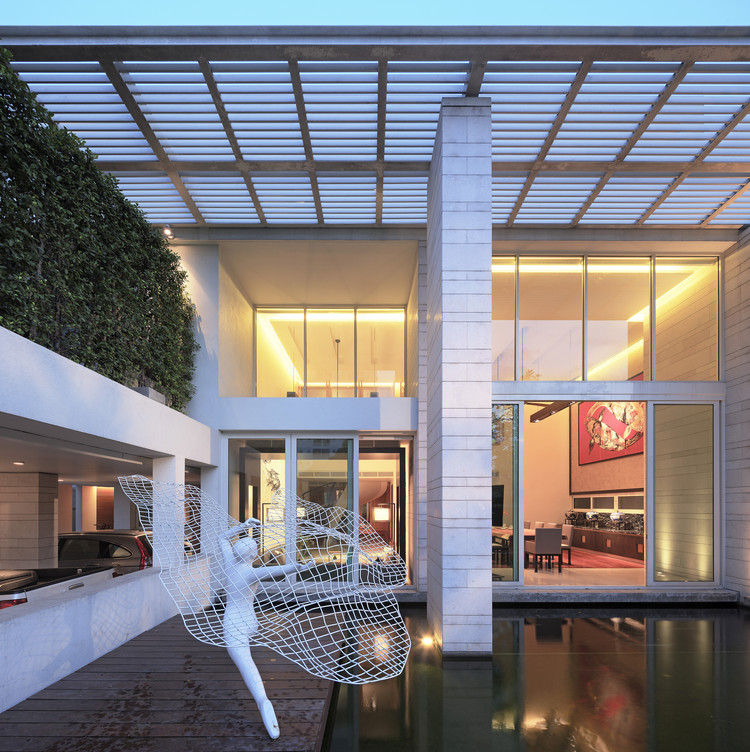 Text description provided by the architects. Gentle House is a renovating project for a family of four locating among other relative houses. Because of a limited land size, the architect firstly proposed to torn down the whole building and enlarge the whole new structure. However, the owner rejected the proposal with just only one reason that he would like to keep it as the most memorable place. This had urged the architects to re-analyze the whole project and build accordingly to balancing both the remaining and the extending functions thoroughly.

The most memorable reminiscing architecture is “the main spiral stair.” This stair was initially assigned by the owner’s mother who got an inspiration from the staircase in Italy. However, this stair was not popular for being a main circulation due to its tightened enclosure. This observation and research incited the design team to preserve the main staircase. To encourage members to use the main staircase, the house plan was reconstructed deleting the service stair.

Comprised of the owner’s primary intention, to expand the spaces, the architect decided to rearrange the living units of the house by inserting two-duplex living compacts, of which he called “sub-condominiums,” for the sons’ future families. As a result, the family would have three houses together on the same old property.

Monotello started by using diagrams to analyze the most common area in the house and the least used space. The solutions revealed that the position of the spiral stair should locate at the center of the house and should be surrounded with the secondary important spaces such as the father’s living room, the shrine room, and connecting to the corridor that led to the sons’ units. The architect also torn down some floor plates and beams that would increasingly signify space around the spiral stair. He demolished the skylight that allowed sunlight illuminating the internal space. This renovation helped accentuating the spaces and maintaining a good memory of everyone.

Despite this reservation, the design team has remodeled the rest of living units. For the father’s part, they combined the living room and dining area together, and made it becoming father's meeting space. For the sons’ parts, the architects furnished based on their personal styles. Besides, the former outdoor garden that used to be neglected also got renovated. The architects created a small pocket park in the front, while preserving the same tree that used to be an indication of this house.