Save
A House of Small Talks / WARP architects 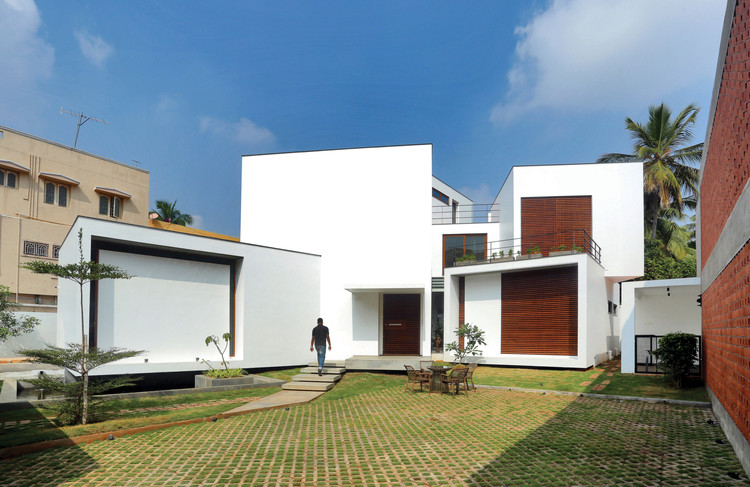 Text description provided by the architects. On account of rapid urbanization and gentrification of Indian cities, construction and design typologies of houses have become more and more formulaic based on the locally prevailing trends and thus losing their connection with the Neighbour and the Nature. The house is located in a crowded residential neighborhood of Coimbatore within a typical residential block. The design tries to create dialogues between, the house & its neighborhood and the spaces in-between: built and unbuilt. Within the precinct; the dialogue of the inhabitants and spaces.

The house is set aback from the street breathing a landscape into congested street making the house perceivable at a glance. Each function of the house is identified as individual volumes and then introduced to a game of twisting, stacking and interlocking creating spaces that overlap spatially and converging angles to a point where the inside meets the outside. The spaces formed due to the irregular angles let the inhabitants discover the use of the same space differently every time. These allowschanging equations between all the components of the house defining the act of living.

The twisting of the central block creates a courtyard around which the rest of the block is pivoted, the courtyard visually binds all the spaces together and hence rightly becomes the house of the deity( Pooja room), the idea of having the divine look over the house. A 16ft high charred wood free standing wall forms a backdrop around which the living room and stairs are phrased spilling conterminous volumes into each other.

Skylights over spaces provide an ever-changing movement of light through the day rendering different moods and experiences. Natural wood, charred wood, exposed concrete ceiling with dark rustic tones are balanced by plain white walls and green spurs of plants. An amalgamation of forms, volumes, light, landscape, and in-surging territories creates an ambiance to discover and experience as we go past time from one day to the next.

The two illustrations place the design in contrasting environments changing its equation with its proximities in each scenario:
1. The first illustration is the design in its actual urban context and the dialogues it creates in the urban knit. The breaking of the repetitive pattern adds a new layer of complexity to the locality and its context.
2. The second illustration is the design in an isolated surreal context with the city’s natural silhouette forming the background denying the daedal mesh of urban context impelling projections at a larger scale.