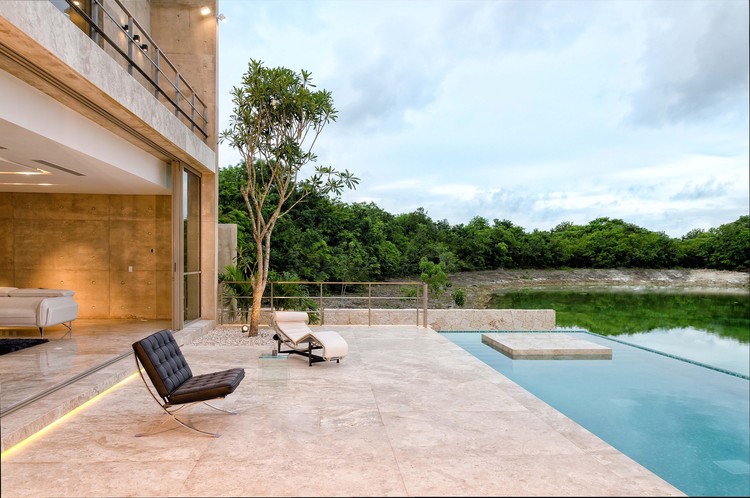 Text description provided by the architects. The project is conceived as a temple in the jungle; the abundant vegetation in the area traced the lead to the conception of this segmented block which permits simultaneously the strongly wished sequence between inner and outer spaces, achieving efficient use in natural sunlight and air-circulation in every room. The premade concrete structure allowed for great clearings facing to the northeast enabling an astonishing view of the sunset over the lake.

The sequence of spaces is ruled by surprise: it is set up with a central hall running from the main façade up to the back façade where the swimming pool and the lake are both located. This lengthwise element crossing and articulating the whole of the house has been inspired by the restrained perspectives in Palladio Olympic Theatre, simulating a dual obliged perception of proximity or distance. Likewise, this simple feature serves as a background to the garden framing the threshold to the access.

The trajectory focuses on the lake and going through it becomes an aesthetic experience of enjoyment derived from the chiaroscuro sight of the workpiece by Colombian artist Ramon Laserna. It is flanked by walls alongside, which stand out remarkably at sunset time, generating an amazing view of light and shade effects emulating the greatest civilizations of ancient times, like Chichen-Itza, Uxmal or Egypt.

The house is introduced by a fully simple but elegant front facade with significant tree and vegetation bulkiness behind it. In contrast, the back façade faces to the lake and integrates with the required typology satisfying the claims from the residential complex and clients as well. In general, it is a monochromatic architectural piece, in sand-beige and golden shades that warmly welcomes both the landscape project and the original vegetative context. A chromatic fusion with the context is achieved by mimesis with the ground and sand of the area.

The topography of the land was an accomplice element to reach to an efficient solution to the architectural plan. The street was preserved to a +-0.0 level and was also kept all along the ground floor, whereas the land descends to a 15% in a regular way, allowing for the construction of machine rooms in optimum functioning adjacently to the swimming pool and the solarium. The level contrast between the land and the solarium provides for the reception of visitors in an elevated terrace-like style without any indoor step. The level-off work was effortless since a building, fully adapted to the land physiognomy, was accomplished.

The architecture and design of the elements, especially the load-bearing walls, are unique and they exhibit a technological language which incorporates the plastic work by the Latin American artist, previously mentioned, and the work performed by artisan-carpenters from the State of Mexico. This sophisticated link ends up in the pleated forms of the central body of the construction, which supplements with the audacious practice of the structural estimation resulting in big frames with clearings over the top allowing for visual openings to the lake in a totalitarian way. 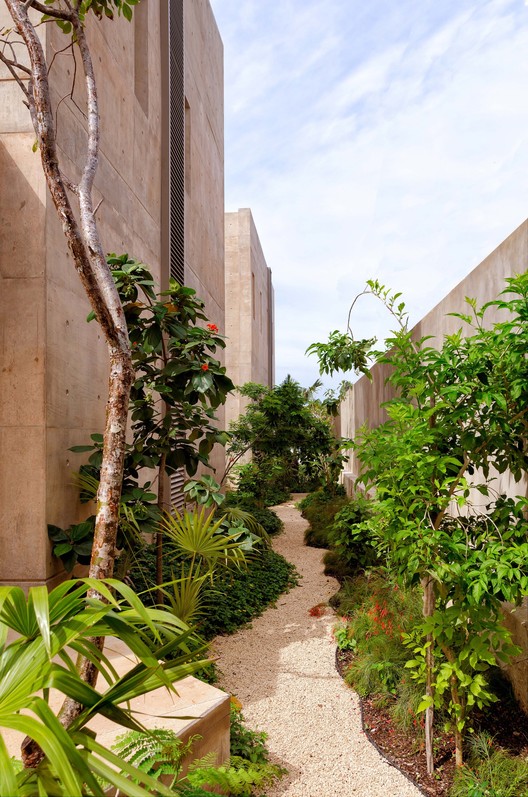