UK-based artist Alex Chinneck has unveiled his latest architectural installation, transforming the walls of a soon-to-be-demolished 1960s office building on the former Kent Wool Growers site in Ashford, England. “Open to the Public” features an eight-meter-high double zip running down the side of the building, revealing the forlorn interior.

The double zip descending the short elevation is joined by a long single zip running the full length of the building, peeling back the walls and windows in a move inspired by the area’s history of textiles and fabric.

Having begun work on the intervention earlier this year, Chinneck installed the artwork over the course of a single Sunday night. Playing on a surreal difference in scales and properties, Chinneck aimed to create a playful artwork which draws public attention to the soon-to-be-demolished structure.

The Kent Wool Growers project will be a bit too theatrical to just walk past. With the time and money being invested into the quality of the illusion, it will be mind-bending. People will ask ‘is that building actually doing that?’ Believability hangs on execution.
-Alex Chinneck

The secret project was commissioned by London-based regeneration specialists U&I, who hope to build 250 homes on the site, contained in four apartment blocks ranging from six to fifteen floors.

Chinneck has a history of creating playful installations with architecture as his canvas. In 2017, he installed a ripped brick façade on a London building titled “Six Pins and Half a Dozen Needles.” In 2013, his installation “From the Knees of my Nose to the Belly of my Toes” featured the brick façade of a seaside terrace in Margate sliding down into the front garden.

Open to the Public will be officially unveiled on August 2nd. 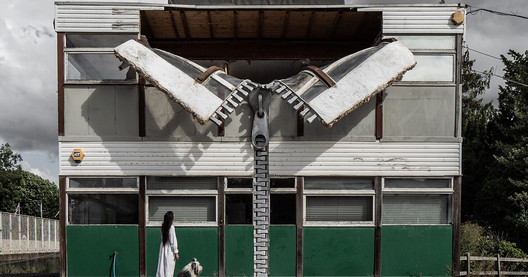