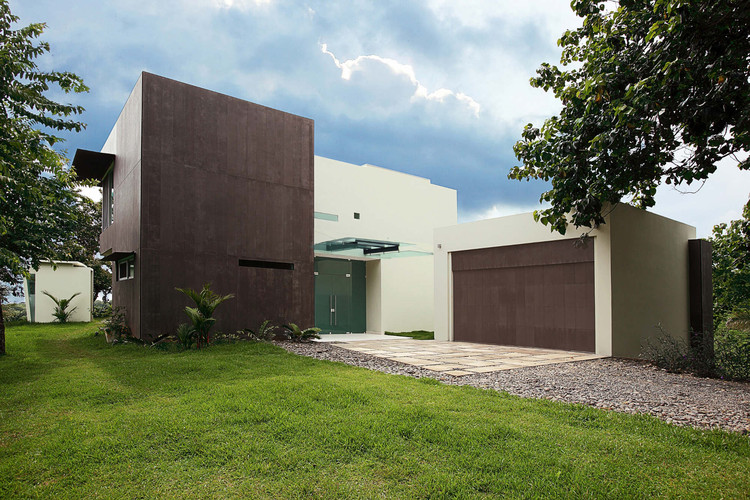 Text description provided by the architects. Triangulo , as the name states, is based on three line geometry. Each line has different length and the two largest sides delimit the property and point to steep slopes and abundant natural richness. The sharpest angle points emphatically to the West coast of Ostional, Guanacaste.

The project’s shaping consists of a volumetric set that mixes and contrasts filled and empty spaces, horizontal and vertical, marked by a surrounding main solid element that fades away until it visually merges with the natural context. In the same way the entrance is marked by an impressing grey volume that with elegance and sobriety anticipates the access to an open and transparent space. Upon crossing the threshold, spaciousness is expressed by double heights that end on a skylight, which illuminates simply the water running.

Rooms, circulations and nature are joined within a concept of lightness and transparency through the absence of solid elements while the staircase emerges extremely light drawing on a single stroke the merging of the levels. It erects as a sculpture element in the social area.

Conceptual exploration of boosting the relationship between indoors and outdoors generates spaces that completely open to the outside allowing a perceptual merge of the first level which causes a feeling of being immerse in the canopy.

The architectural proposal seeks for space with surrounding lines together with contrasting angles to break free of the orthogonal, expressing in this way the dynamism of the few walls that make up the residence.

The use of color materials and textures is subject to creating integration and a contrast with the environment at the same time. This ranges from the tonality chosen for the windows to the volumetric language conceptualization and its corresponding characteristics.

Within this conceptual framework different spaces acquire their own language by themselves keeping general influences of the architectural proposal but with particular variances that enhance their spatial quality. The kitchen joints the social space but it stands out to achieve a particular clean and minimalistic shape. The living room joints it and this continues to a wide terrace generating an integrated triangulation but with spatially different characters.

Subsequently, and finishing the visual tour in the first level, attention is drawn towards the sea that merges with the swimming pool and its endless edge.

The upper level further explores the relationship with the panoramic view of the ocean, framed by hidden evidence that show the project’s constructive lightness. Besides, the dry gardens over flagstones and the upper sun deck stand out as an extension and complement to the interior in order to make a better use of the visuals.

Particular spatial and shape elements come up as complements. For example the runway-deck that floats over the steep slope that goes around the residence. This works as a connecting element for the guest room and the social area, as a link between the outdoors and the indoors. The Gazebo also stands out in function of the swimming pool and it is perceived as an object that is part of the landscape.

In the same way there is an interest for reducing the impact with the natural environment aiming to be compatible with it and to be energy efficient. These are the reasons why there is a functional implementation of solar panels for water heating, wide monitors for temperature control that crown spaces with more use, such as the kitchen and the master suite, and they allow extraction of hot air providing cross natural air flow, thus minimizing the use of air conditioning. Same thing happens with the window selection where large sliding panes from floor to ceiling allow for maximum opening.

In this way bio-climate control plays a mayor role in the project, e.g. using generous overhangs to reduce sunlight exposure and work as protection of heavy and constant rains typical of the place.

In summary, triangle moves from the natural to the built; it lies in the peace and harmony of the natural landscape that hosts it while resting as a guest that is respectful and at the same time enhancing and interacting with the exuberant scenic level that surrounds it.