Design on the project started in 2009. At the crux of all design ideas was creation of a simple, functional and responsive building that was not only efficient and sensitive to its surroundings, but also a piece of iconic architecture that reflected the city in spirit.

Located on a trapezoidal site, the building takes on the shape of site to maximise the usable areas. The design intent to provide functional and usable rectangular floor plates for offices resulted in the triangular extensions on building rear forming circulation and service cores on all floors, and on front as podium of lower retail floors.

While the building form took cues from both need of preferred rectilinear floor plate as well as the angular site lines, the built form is imagined as a metaphor of a sailing ship. The solar shading ‘sails’ behave as brise soleil keeping out the harsh western sun, while filtering slivers of north light that bounce off the inner wall surface onto the main work spaces. The sails are also punctuated with methodically placed smaller slits, a representation of Corbusian aesthetics that create synchronised sequences of light and shadow throughout the day on the work floor.

The form was design fitted with a high performance façade that takes its prompt from building orientation. Glazing on the harsh west and south of the structure has been restricted to a minimum. The northern facade of the building however presents an inverse face, as it looks to allow to as much light as possible. The minimal glazing is treated with foliage pattern ceramic frit which helps to diffuse light and heat while alluding to the reputation of Bangalore as ‘Garden City’.

All surfaces exposed to harsh weather have been covered with HPL panels with a rear ventilated system that improves functional performance of the façade with respect to heat reduction, noise reduction, increasing weather protection, thereby improving the overall sustainability of the building. Double glazed units have been used on the western facade to further increase the thermal efficiency and significantly reduce energy costs over the life of the building. The combination of these two façade systems also results in efficient sound insulation, which was one of the priorities given the location of the building next to a national highway. The net effect is a well-lit and quiet indoor environment.

The project was completed in 2018 and was awarded LEED Gold certification. 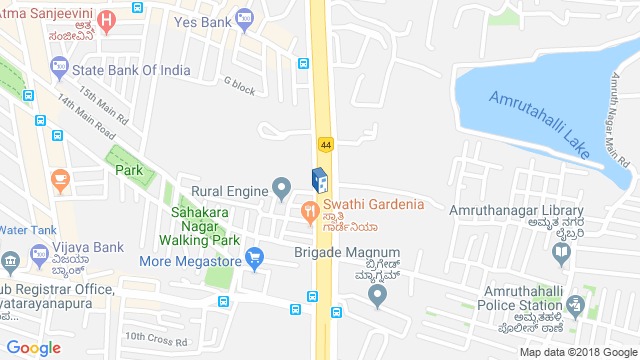 Location to be used only as a reference. It could indicate city/country but not exact address.
Share
Or
Copy
About this office
Sudhakar Pai Associates
Office
•••