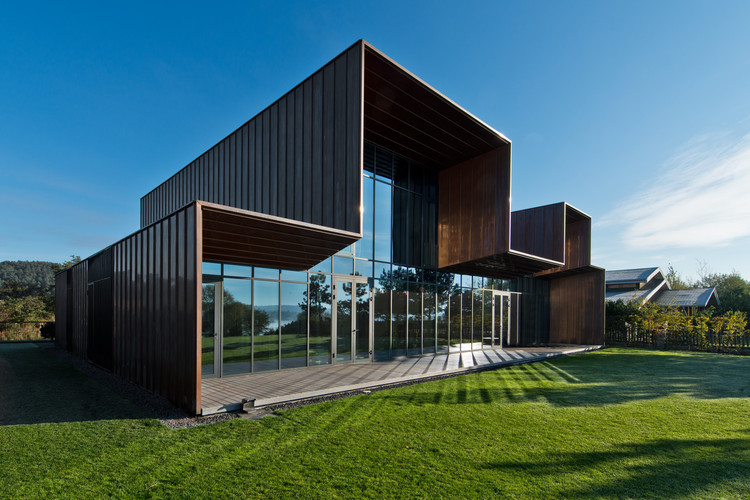 Text description provided by the architects. A stylish three bedroom house in the unique location on the shore of Lampėdis quarry. The plot chosen by the customers is clearly oriented to the water body and a horn distinctly emerging on the shoreline. It is for this reason that the landscaping solutions of the plot are ascetic; the spacious open courtyard emphasizes the opening view to the water body.

The concept of the building was based on the principle of screen architecture. The graceful cornices on the main façade create the depth impression, turning a simple shape into an intriguing and interesting object. This exceptional detail creates a clean and minimalist silhouette of the facade, in framing a huge, solid glass facade. The tapering cornice cut thins out the structures and gives sharpness to the volume. According to the architect, cornices are like a horse's blinders, directing the glance in the main centrepiece – to Lampėdis quarry but also closing the view from the surrounding buildings. It is not just a beautiful architectural detail but also a functional solution. Cornices extremely smartly and stylishly separate the living spaces from neighbouring plots and at the same time protect the glass facade from environmental effects: sunlight, precipitation, and serve as a sun canopy on the first floor terrace.

The building volume looks aesthetic and clean. It consists of three segments: the main rectangle on the first floor and two different rectangular volumes on the second. The main bedroom is rather pronounced on the facade. It is counter weighted by the library. These elements reduce the volume scale and create the dynamics in the facade line. Copper tin was used for the finish of the facade.

Architectural solutions create an interesting scenario between the exterior and interior of the dwelling house. As seen from the courtyard, graceful cornices focus on the glazed facade and the open interior of the house. Conversely, the interior of the house emphasizes the panorama that opens. Looking through the windows, it seems like there are no other buildings around, just the water in front.

The architect says that the concept of the building depended on functional needs. The customers have a unique occupation - they breed dogs. Therefore, they wanted to have the entire block on the first floor for keeping dogs. This design solution is also reflected in the volume. The first floor area is significantly higher than the second. The dynamics in the interior spaces is created by the open lobby in the centre of the building, linked to the library on the second floor. There is also a spacious and bright living area. Huge showcase windows allow to admire the landscape of the Lampėdis quarry, and bring in a lot of natural light. Because of the privacy feeling created by the cornices on the façade, all living spaces are open and without curtains. The concept of openness is also maintained in the main bedroom offering even more expressive view of Lampėdis quarry. By analogy to the façade, the minimalist aesthetics is kept clean throughout the interior.

Here we indeed can feel the connection between human life, the surrounding nature and architecture. 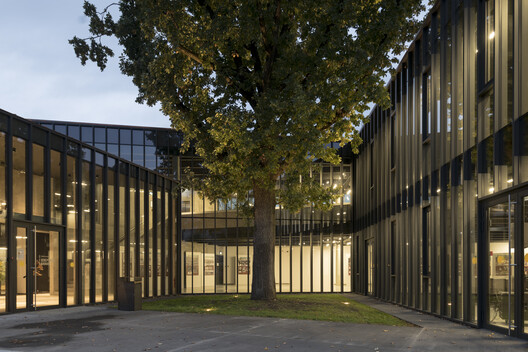