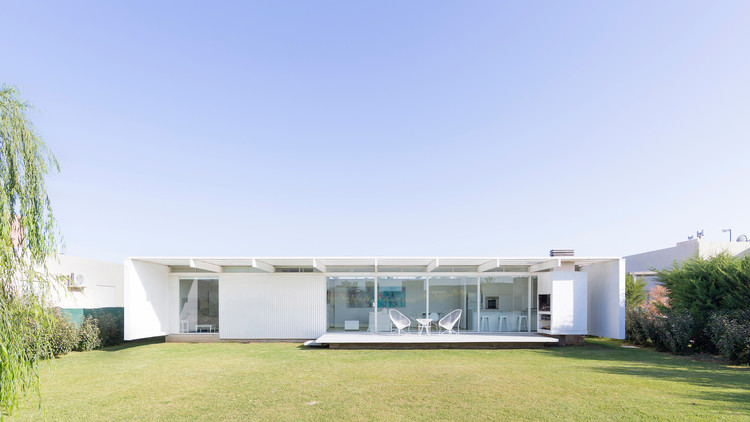 Text description provided by the architects. The house is located on a plot of 730 m2 in El Maitén, a suburban residential neighborhood of the city of Bahia Blanca. It was financed with a PROCREAR loan granted by the Argentine state. At the request of the owner, its realization was planned two construction stages: made, a house with an area of 70 sqm plus the gallery, which meets the needs of basic use for the single user, and the second stage with two bedrooms and a bathroom for future growth.

The positioning of the house in the lot is transverse, leaving 2 empty spaces: one back where the garden is located that is visually related to the main interior spaces and frequently used (first stage); and one to the front, planned to position the second stage of construction.

The gallery to the east sheltered with its lateral fronts generates a protected area of the strong prevailing winds of the west; turn, and not obscure the interior of the house, covered with translucent polycarbonate, allowing its use in rainy days. Towards the west, the house closes in its entirety to protect itself from the hostile sun in summer. Only high windows are projected to guarantee the interior movement of the air, renewing its volume in a few minutes.

The house is made with a mixed construction system, consisting of supporting walls of the steelframe type, and columns that support laminated wooden beams modulated every two meters. The roof is made with a single sheet, slightly curved, that drain with slopes towards both facades. 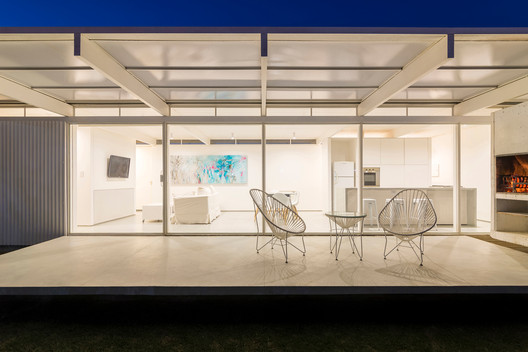