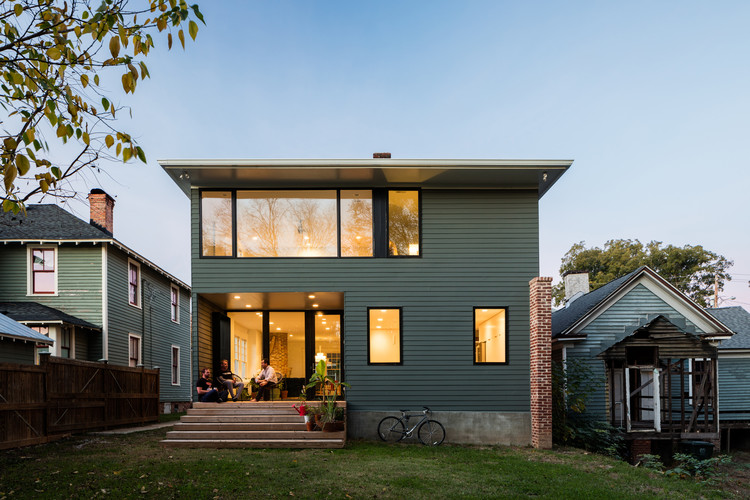 Text description provided by the architects. The Nolintha Residence is a renovation and small addition to an historic, 1920s four-square house in downtown Raleigh. Our clients, who are brother and sister, are successful restaurateurs. They wanted a house with separate bedroom spaces, shared living spaces, and that could accommodate large events. The Raleigh Historic District Commission (RHDC) required that the exterior front of the house remain largely unchanged and that the rear addition be simple enough to not distract from the historic structure. The interior, however, was completely reformed and is now washed with light, a stark contrast to the heavy historic façade.

This house is our clients’ first home, and the program they presented was unusual – the renovation of a decaying, historic four-square to accommodate food-related events and provide three separate living suites. RHDC controlled the refurbishment of the existing front and side façades. The rear of the house, where a small addition was made to the upper floor and a poorly-built, non-historic addition was remade, is very simple, contrasting the historic portions of the house. Inside, the only elements remaining downstairs are the central and west wall fireplace masses, which would have been too destructive to the integrity of the structure to dismantle. The west wall fireplace is an artifact exposed between dining and living spaces, and the few storage and support elements downstairs wrap around and hide the central fireplace mass. A new stair slides up the east wall, passing in front of old windows to a hall between three bedroom suites – one guest and one for each sibling. These spaces are completely separate from one another, filled with light, and oriented towards beautiful views of the surrounding context and downtown Raleigh.

The existing house was in shambles. The brick mortar had turned to powder in many locations and most exterior trim was rotten.  Water, freely admitted into the brick veneer cavity through open mortar joints, was rotting the walls. The foundation and full basement were miraculously intact and dry, but the edge band and adjacent floor joists had been destroyed by water and insects. The house had been rented as three separate tenant spaces for years, with shared bathrooms and an overworked kitchen. The subdivision of space to make this possible was haphazard to say the least, and several suspect changes to load bearing conditions had caused roof, ceiling, and floor spans to rely on one another in eccentric ways. Plumbing, mechanical, and electrical systems needed to be replaced. The renovation of the house involved dismantling much of the interior framing, installing new structural members from the roof down to existing foundations and in areas of over-spanning, and repair of the brick veneer and rotten exterior trim. New systems were located in the basement, which was cleaned out and reserved for storage.  The finished house, once on the verge of being unrecoverable, now has another fifty years of service ahead. 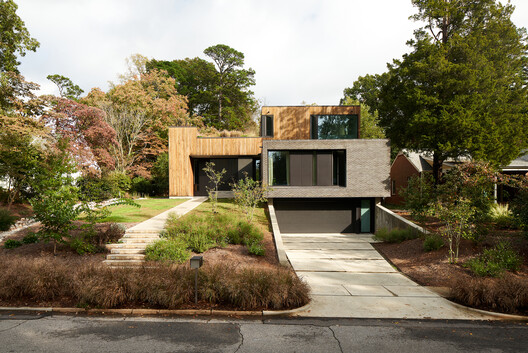