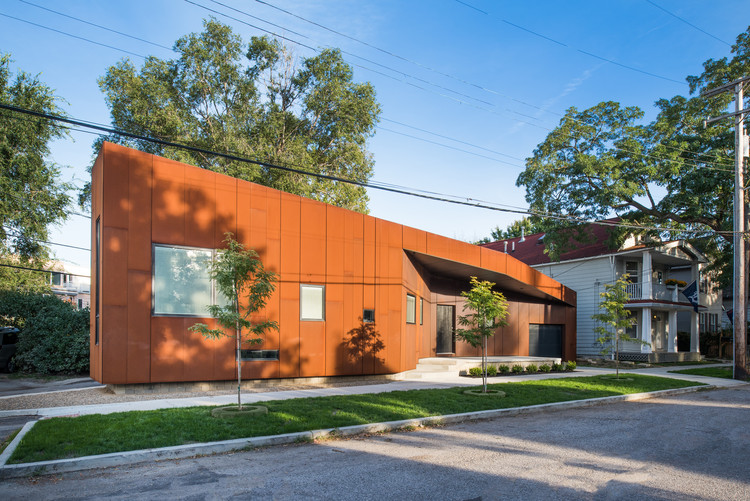 Text description provided by the architects. Located amidst the densely packed steelworker cottages, bodegas, and boutiques of Cleveland’s Tremont neighborhood, this single-family residence tells onlookers as much about its unconventional location as it does about its eccentric owner. The site, a triangular parcel etched by the intersection of the neighborhood’s two street grids, and the owner, a retired attorney with a revolving and idiosyncratic furniture and art collection, serves as the impetus for the house’s conceptual framework.

To optimize the potential of the site’s modest and constrained footprint, the home is conceived as a solid volume built to the extents of the property line. Portions of the volume are thoughtfully carved away to activate the ground plane along the street, to establish pedestrian and vehicular lines of site, and to respond to the shifting building typologies of its environs.

Divided by a central stair, the private and public spaces organize themselves from South to North, respectively, as the building tapers in width while expanding in height. The private space, a series of modestly sized rooms (bedrooms, utilities, storage), occupy the deep southern half of the parcel and orient themselves orthogonally along the W.10th Street grid system. A drive-through garage connects both streets and doubles as a workshop.

Conversely, the public spaces (kitchen, living, dining, and foyer) occupy a single room, aligning with the Thurman Avenue grid. Both public and private are bound together by an elevated porch (in the plan) and a thickened continuous canopy (in elevation). Though seemingly random when viewed within its urban context, the fenestration is governed by functional logic when experienced internally.

Large expanses of glazing occupy the public spaces and reduce in size as they inch closer to the private, allowing for curated placement of art and an ever-changing offering of daylight. Sill heights are lifted only enough to maintain visual privacy from the sidewalk. One window, residing quietly at the floor, serves as a moment of singular exception and a place for Deane to offer up daily thoughts, scribed on paper and posted to passersby where they may capture a limited glimpse of his private interior.

The building’s restrained material palette, exposed concrete, glass, and steel was the first choice of Deane as well as the architect. It alludes to both the rich history of the City and the nostalgic sensibilities of the owner. All materials were sourced locally and selected specifically for their ability to weather over time. The steel panels are smooth and varied along W.10th Street, responding to the fenestration and rhythm of the street.

Along Thurman Avenue, a one-way alley lacking sidewalks and building frontage, a vertically oriented corrugated pattern react to the undefined scale.  Smooth cast in place concrete serves as the podium for Deane’s exterior space while CMU blocks serve as the plinth for the polygonal structure. The weathering steel skin is lifted off the plinth along the perimeter, giving the heavy steel structure a delicate presence at its tapered corner. 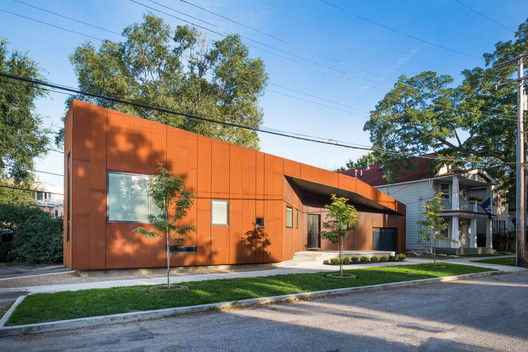