Save
The Twist and Shout House / MSSM ASSOCIATES 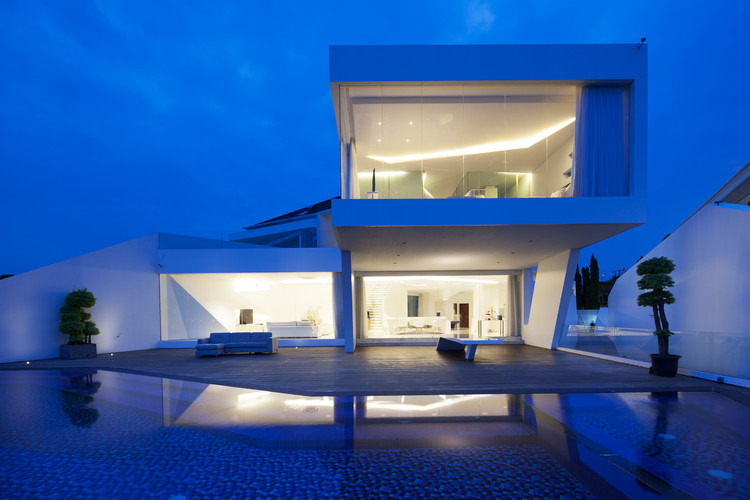 Text description provided by the architects. Examining the city as a living, breathing organism is a school of thought that has become increasingly grounded. With rapid changes in the demographic and environmental condition of Semarang, the city has been forced to adapt to these changes, similar to the way a living organism adapts to changes in environment. It is only through a successful adaptation does the city ensure its longevity. More importantly however, this transformation in the city fabric must take place at every scale, and not only the global one.

The Twist and Shout house addresses this issue at a local scale. One of the first residential units in the City of Semarang to address the challenge in construction and design. The Twist and Shout house takes a completely Avant Garde, progressive and unique approach to lifting the urban fabric of Semarang at a local scale to compete with other urban tissues at an international level. The interplay between function, form, light, environmental performance, social response and local assimilation has transformed what is usually considered to be a mundane residential dwelling, to one that has pushed the boundaries of construction and design evolving into an architectural landmark that has become unique to the fabric of the city.

Above all, the city fabric is defined by its components, and so, the Twist and Shout house aims to play an important role in opening the dialogue between the significance of these components and their influence to transform the city of Semarang on both a local and global scales.

From the project's onset, the design has been a great challenge as the client's requirements were very specific and detailed; the primary difficulty was to address the client's request to live in a home that is visually stunning and unique, yet simultaneously maintain the conventional cultural requirements of a 'Semarangian' home. This request stem's from the client's traditional background of having a strong belief in Fengshui and a demand to stand out from the environment. Although essential to address, this was one of the greatest challenges when attempting to develop a free-form plan and structural solution for the home. The second challenge arose from the complicated yet very specific flow of activities required within the entire project; where the house serves as a base for the client's profession without hindering in the slightest the day to day residential activities of the home's occupants.

In addition to the above, the client required the design and distribution of internal spaces of the home to allow for hosting frequent social events on a multitude of different scales while simultaneously maintaining a high level of privacy for the other occupants of the home. Finally, the client's admiration for challenging structural methods and techniques has allowed us to explore inventive structural design methods that contribute to all of the client's requirements as well as ensure the project is adapted seamlessly to the location's environmental and geographic conditions. Therefore, careful consideration and assimilation to the external environment was of utmost importance.

The geometric exploration of the home's morphology aimed to maximize the site's potential, a series of well defined and calculated geometric and sculpture like interventions on the facade exploits the tension between conflicting elements. In contracts to the internal areas, which are designed to have greater fluidity in transition between the spaces in both the horizontal as well as the vertical; allowing for uninterrupted continuity and harmony between adjacent spaces.

The house is divided into three zones : The basement garage which doubles as a service area; the ground level which serves as the heart of the home, providing a communal space that includes the sitting room, family room, dining and pantry areas, and consummated by the external pool area that serves as a vignetter to the spectacular view across Semarang City.

In contrast to the public and uninterrupted communal spaces of the ground floor, the first floor is distributed with greater privacy for its occupants; connecting the bedrooms through a single hallway that is made unique through a series of custom patterned openings that contribute significantly to the streamlined ambience of the home's image while simultaneously allowing for natural ventilation and lighting to the different internal spaces of the property.

One of the significant features that defines the design of the project is the application of a parametric-based system for the primary facade of the structure that expresses fluidity in motion. The approach was driven through a detailed solar analysis on the structure, with great attentiveness given to the eastern and western facades. This axis is the cause for the majority of the thermal transfer from the external environment; as such, the geometry's formal attributes were adapted to limit and control the thermal conductivity into the structure.

The distribution of the facade's openings were heavily contingent on three factors - view axes, occupant height, and the uniform distribution of natural light throughout the entirety of the internal spaces. In addition to their distribution, the geometry of the openings themselves were designed to also signify movement and flow. The result is a dynamic interplay of light and shadow that generates a sufficient amount of natural luminance yet retains a comfortable ambient temperature throughout the home's interior. 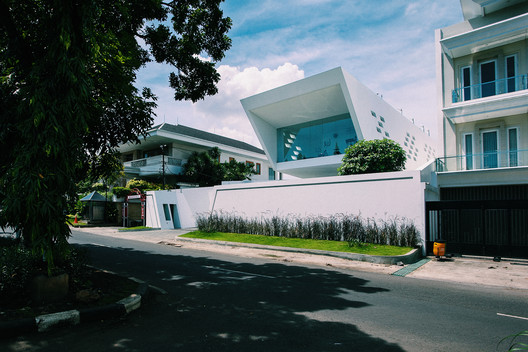 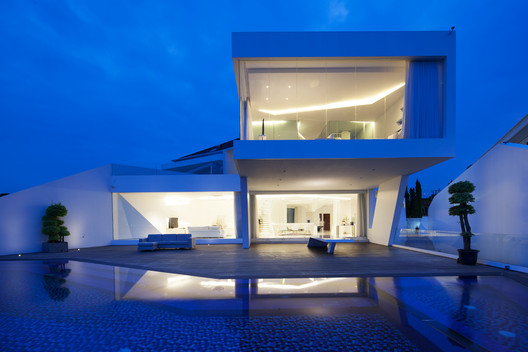