Save
The Oldest Building in Every US State
Share
Or
Copy

The United States is a comparatively young country, but one with a rich and diverse history. From the ancient villages of New Mexico’s Pueblo people and the early Spanish settlers in Florida, to the Russian traders of Alaska and 19th-century missionaries in Utah, each of the 50 states has its own story to tell.

There’s no better way to trace this history than through buildings, which is why we’ve mapped out the oldest intact building in each US state. Whether they’re cottages, grand mansions, fortresses or churches, these historic sites offer us a glimpse into the early days of the regions. They help us to understand what brought early inhabitants to the state – and what their lives might have been like.

Some of the buildings we’ve chosen only had a brief moment in the spotlight, like Nevada’s Old Mormon Fort, abandoned just a few years after the Utah War. Others have built up centuries of history, such as the Louis Bolduc House in Missouri. It was built for French-Canadian settlers in 1798, and their descendants continued to occupy it right up until the 1940s.

Some are impressive feats of construction, such as the wattle-and-daub Cataldo Mission in Idaho. Not a single nail was used in the entire building! Others, though, were less successful. Ka Hale Lāʻau in Hawaii was designed in and brought over from New England, with only a later realization that the structure was completely unsuitable for comfortable living in a tropical climate.

Whatever the case, these structures are all an important part of their respective state’s past. So get exploring – you might discover some buildings you didn’t expect!

Built in 1808 and restored in 2007, the log cabin was moved from its original location in Ardmore to Burritt on the Mountain and is now listed on the National Register of Historic Places.

The Magazin, now the Baranov Museum, dates from the Russian colonization of Alaska, when it was used as a storage facility for the Russian-American Company.

Considered one of the best examples of Spanish colonial architecture in the U.S., the complex is still in the hands of the Franciscan Order and is a popular pilgrimage site.

The Woodruff Print Shop was the business premises of William Woodruff, who printed Arkansas’ first newspaper, and is now part of the Historic Arkansas Museum.

The Mission was founded by Franciscans from Spain and has since been used as a backdrop for early Hollywood films like The Two Brothers.

The largest dwelling in Mesa Verde, Cliff Palace was home to an estimated 100 Pueblo people and thought to have been used often in ceremonies.

New England’s oldest stone house was built for Reverend Henry Whitfield, the leader of an English Puritan community and the founder of Guilford. It’s been a museum since 1904.

This two-story structure dates from the time of the last Governor of New Sweden, Johan Risingh, who ordered its construction to defend against attacks.

Old Stone House is DC’s oldest structure on its original foundation and serves as an example of pre-Revolutionary architecture.

This defensive fort was ordered by Florida’s Spanish Governor to defend the city of St Augustine at a time when it was still part of the Spanish Empire.

A reminder of the state’s colonial history, this house was built by British military aide Major William Horton and is constructed of tabby, a unique concrete that was common in Georgia.

Ka Hale Lāʻau, meaning the ‘wood house,’ was a pre-cut wooden frame structure designed in New England with little consideration for the Hawaiian climate, but nonetheless housed missionaries for about 60 years.

Built at the request of members of the Nez Perce and Flathead tribes, the Cataldo Mission was constructed using an old wattle and daub method – without using a single nail.

One of Indiana’s four original legislative centers, the building was used for meetings in 1811 and is now on display at the Indiana Territory State Historic Site.

This log cabin originally housed a settler family in Dubuque, but has since been moved twice to settle at its current location on the Mathias Ham House estate.

Most famous as the home of the Military Connections Complex, Fort Leavenworth also hosts Kansas’s oldest building, the Rookery, built as bachelor officer quarters and later used as the office of Governor Andrew Reeder.

This historic estate, once owned by the sister of William Clark, is the only site west of the Appalachians to have sheltered the famous Lewis and Clark expedition.

Built in French Colonial style, it’s said that this building was used by privateers Jean and Pierre Lafitte as a cover for their illegal smuggling activities.

This is one of the oldest examples of a colonial guard house, built by English settlers to protect from Native American and French attacks.

This old church was constructed by English settlers on an 85-acre plot and contains a number of typically English features, including its West Gallery and the coat of arms of Maryland’s benefactor, Queen Anne.

Constructed for Puritan Jonathan Fairbanks and his family, this is the oldest timber-frame house verified by dendrochronology in the US.

This substantial stone building is part of the wider Fort Mackinac complex and housed British soldiers during the American War of Independence.

Designated a ‘national treasure’ by the National Trust for Historic Preservation, Fort Snelling was set up to enforce law and order following the War of 1812.

The Old Spanish Fort draws its name from a spell as the fortified residence of a Spanish soldier, but it in fact began life as an indigo and wax myrtle plantation.

French features like the hip roof are clues to this house’s origins; it was built for French-Canadian settlers and remained in the same family until the 1940s.

This is all that remains of the old fortress, which was once the final outpost of the Mullan Road and the Upper Missouri fur trading route.

The cabin was built as a trappers’ residence in the Missouri floodplains and was later moved in 1850 to Bellevue, where it continued as a family home until the 1950s.

Mormon missionaries established this adobe-brick fort at the midpoint between Salt Lake City and Los Angeles, but abandoned it in the Utah War.

Once part of a 25-acre homestead, the Richard Jackson House has a noticeably American style, with the use of wood and large spaces.

This log cabin was built by Finnish settlers with close-fitting oak logs and was lived in until 1918.

A UNESCO World Heritage Site and still inhabited today, Taos Pueblo was built 700-1000 years ago with adobe brick by the Taos people and is home to 150 residents.

Although predated by a carpenter’s shed, the Old House is the earliest standing example of a colonial house in New York State.

This house was originally a one-story colonial structure, with the half story added on in 19th century.

Though no one knows for sure, it’s believed that this structure was built by French-Canadian explorer Pierre Le Moyne d’Iberville.

These barracks are the oldest structure in Fort Gibson, a significant outpost that served as a final stopping point on the infamous Trail of Tears.

This cabin predates the famous Lewis and Clark Expedition and is thought to be the work of Russian settlers, sent to the Willamette Valley by Catherine the Great.

Built as part of the New Sweden colony, this is an interesting example of a Scandinavian log house and was placed on the National Register of Historic Places in 1980.

Originally a private residence, this distinctive red, timber building was converted into a tavern in 1673 and has also held the Rhode Island General Assembly.

Pink Bermuda stone gives a distinctive appearance to this house, which has also been a tavern and, most recently, an art gallery.

Fort Sisseton, now a State Historical Park, was constructed under the orders of Major General Pope to protect settlers and surveyors moving into the territory.

The first house in Tennessee to have glass windows, the Carter Mansion was built for settler and legislator John Carter.

Site of the famous Battle of the Alamo, the Alamo Mission was originally intended to be a place of Christian education for local Native Americans. It later garrisoned both Mexican and Texan soldiers.

Mormon pioneers established this ranch with adobe construction on Antelope Island, where it continued to be a Garr family home until the 1980s.

Also known as the Joseph Caruso house, this typical early center-chimney Cape Cod house was built by William Harris, one of the first settlers in the frontier town of Brattleboro.

This old church has been amended or rebuilt six times. While the tower dates back to 1639, the nave was reconstructed in 1906.

The historically significant granary is one of the few surviving Hudson’s Bay Company structures in the US, and also an example of a rare post-on-sill timber construction.

This Georgian-style stone house was once part of a fortified complex, and though it was used as a hospital during the Civil War, it’s since been turned into a bed and breakfast.

Wakely Home has a classic wooden-frame symmetrical construction and was built for a family of pioneers, who came from New York and were in the lumber business.

Once an important fur trading post, Fort Laramie sits at one of the best crossing points on the Oregon Trail and is now preserved by the National Parks Service.

This article was originally published by NetCredit and has been republished with permission. 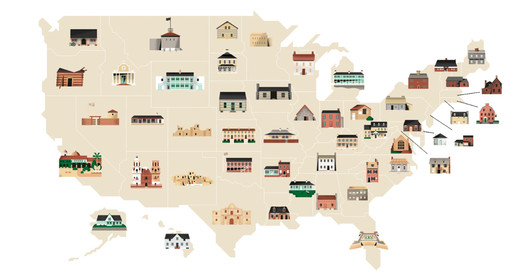