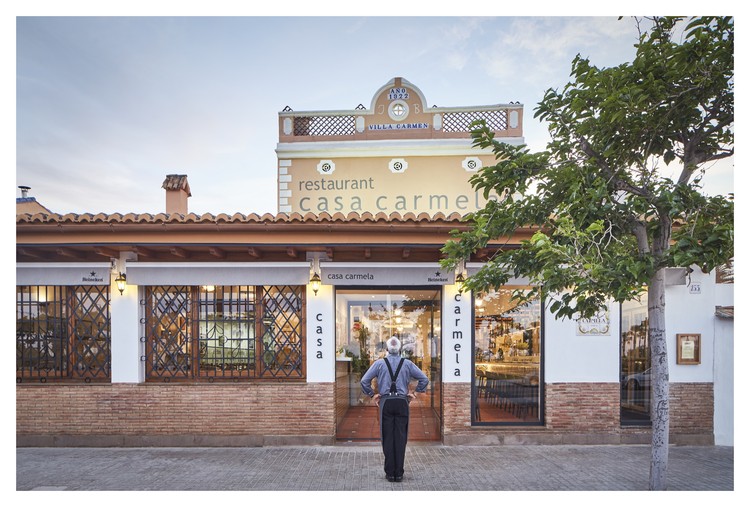 Text description provided by the architects. Casa Carmela Restaurant. "Since 1922 by firewood".

Back in the 20s, the great-grandfather of the current manager of this family restaurant of traditional food, went every summer to the Valencian garden for serving to the Madrid tourists who came to the mediterrranean coast. Casa Carmela began as a barrack serving as a changing room for bathers on Malvarrosa Beach.

It was in 1922 when the company was registered with the name os his wife, Carmen. Over the time, the small business was growing, giving shelter and food to the gests of the mediterranean.

The second generation in charge of Casa Carmela tooks the family business raising their own farm animals, with a corral in the back of the restaurant. This poultru products were also linked to vegetables from the family garden always serving seasonal and quelity products from then to nowadays.

Years later, the third family genetation took Casa Carmela. The establishment was reformed, the bars were extended, the kitchen was also intervened and wooden “paelleros” were built. This upgrades gave to Casa Carmela fame as a specializing house un rice dishes, paella cooked on wood fire with smoked crubchy “socarrat” and also a layer of very fine rice.

This great reform added to a last one arrived on 1989 which also incorporated a terrace, modernizacion of the “paelleros” and the kitchen, and a traditional ceramic coating of Manises –typically from Valencian culture-.

At present, Casa Carmela reaches 170 seats, excluding the outdoor terrace. The mural decoration of the majority os the rooms, covered with Valencian tiles with matine and fruit motifs where there are an abundance of orange and small latin sail boats, reminds us every time the tradition and culture of Valencia.

It was in 2017 when the restaurant underwent a new update. This time, nihil estudio was in charge of the renewing, with and from respect, this space with Mediterranean characteristics where the semll of the sea and light reverberates becoming the guidelines od a familiar restaurant where history has its own voice.

From the respect to previous interventions, nihil estudio works in this project combining tradition and modernity in this family business which represents by itself the passage of four generations now.

Casa Carmela is a restaurant of generational inheritances needed a new update of the bar area. With the premise of recovering the existing ceramic tile, but also modernizing the spacie, speeding up the space and increasing the entrance of light, nihil estudio works in Casa Carmela with careful attention to the importance of showing the details of the high quality products.

Is this careful which gives to this intervention the importance between the present without forgiving the past.

Casa Carmela now opens to the outside allowing the entrance of natural light to practically the inside “patio” (terrace) and also facilitating the diner to enjoy the views of the promenade, opening at the same time to the gaze of the passer-by.

Without losing the essence of “bar” which is characterized in Casa Carmela, nihil estudio intervention shows now the fresh product with which plates are cooked, also recovering traditional existing decoration from the restaurant as tradicional Valencian tiles and also brings light to space incorporating iron elements serving also of support to the bar.

This iron elements serve as an artificial front light and turns allow the visitor appreciate the rehabilitation in the ceiling, where the joists were respected, providing false skylihghts to the space to increase the light sensatiom, creating a continuity between the external natural light and the interior space.

The materiality chosen is based on the respect of materials funded. At the bar, nihil estudio is set to retrieve the tiles found. An exercise which involves removing carefully all pieces during the work to be incorporated once finished. Allowing to show though a contemporary language, the logo of Casa Carmela now is embedded in microconcrete with the ceramic pieces.

Highlighting the craftsmanship of the renowed potters from the Manises, such as the “socarrats” –Terracotta plates decorated generally in reddish or brownish and blackish tones of medieval origin, typical of the Crown of Aragon pottery- which are now revalued thanks to s respectful intervention that also incorporates the uses os a discreet Capdell furniture, highlighting the family and certainly homelike character of Casa Carmela.

Clay floor extended from the main entrance to the interior terrace, improving continuity with the lining of the rest of the restaurant. This purpose looks for the same provider which made the last reform in the 89 thus avoiding the feeling of a “time jump” within Casa Carmela. It also provides a wine cellar to the space serving to the service areas, expanding the bar area and prociding service, unifiying the different restaurant rooms.

This area also provides a wine cellar to the space serving to dining areas, expanding the diferent rooms and providing service, unifying the rooms. This material choice of this new wine is now part of the restaurant, being by itself part of the “common” language, being able to live toward the pre-existing elements and new additions. This new area appears here in wood, in a similar finish to the dinind areas, unifying materiality nd opeing itself to service areas, bringing more light, a continuity visuals and also functionality.

In the bar, cold barrels are carried through a tube buried in the ground the beer until reaching the shooter, where it is cooled again. This is how this service area, characterized by a faster and more direct service with the customer ensures that the product is served with optimal conditions.

Understanding what has been and what Casa Carmela has become means respecting the appearance of its quality cuisine. With presence in means such as the Via Michelin or the Repsol Guide, the paella in particular and the rest of its fresh produce become the protagonists of this restaurant.

This is how the kitchen was opened to the corridor, being able to see the work of the “paellero” and gaving the bar a counter space for the fresh product.

Tradition, respect and good work prevail in this intervention of nihil study where the knowledge of the raw material is valued, going beyond the purely constructive terms. 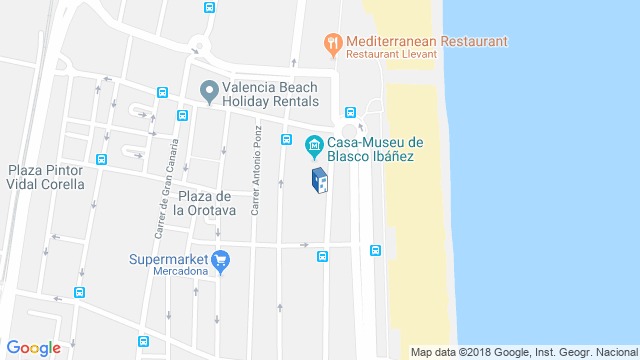 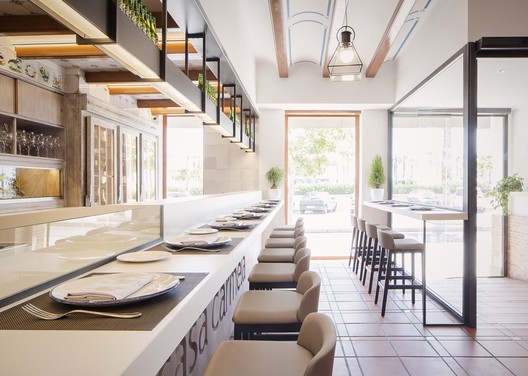