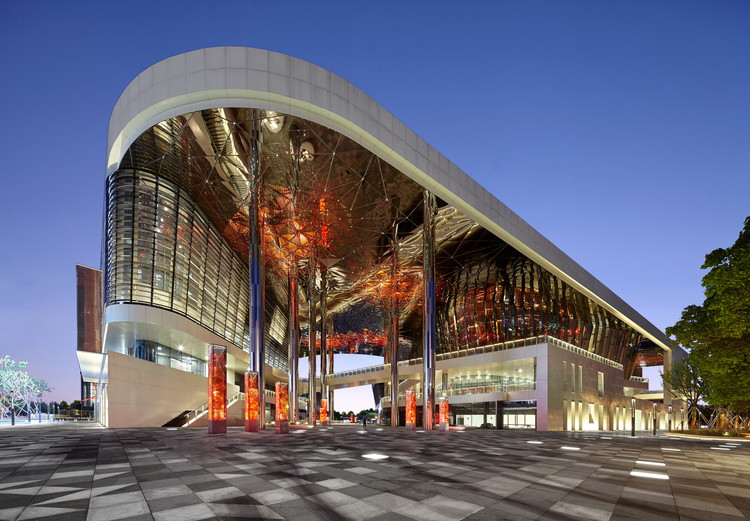 Text description provided by the architects. The new Kunshan Grand Theater is situated in the civic square in central Kunshan, a site bordering Qianjin Middle Road on the north and Zhujiang North Road on the east. As a reconstruction project of the former Kunshan Theater, it has become an integral part of a cultural complex, together with a library on the west, a swimming center on the south and a sports park on the southwest.

The planning feature of surrounding blocks has been adopted in the space design. The building was endowed with the concept and image of a block through the consolidation of its boundary. Curves, as a prominent feature of the building, have not only set the theme for the interior space, but also defined the feature of the building’s layered exterior platforms, which are connected by specially-designed staircases, making the platform spaces both sequential and integral. As a result, an open and welcome posture has been formed, naturally merging the building into the big picture of the landscape.

The original context of the site has been preserved through the oblique axis of the building entrance, dividing the building into two parts: the east side and the west side, sharing a grand curved roof with a sense of flow, under which an open space has been formed at the corner of the road. On the roof, perforated plates, mirror honeycomb plates and corrugated honeycomb plates, all of which are made of stainless steel, have been aligned with skylights. The mirror ceiling overhead, and the square paving underneath have form a delightful contrast, reflecting the static ground and dynamic passengers in the day while presenting the changes of light and shadow at night.

9 concrete columns on the square, coated with mirror and frosted stainless steel, have created an ambience full of variety. Thus the square under the roof is bonded with the city square, forming a public space for gathering and recreation. Southward along the axis are a sunken courtyard and a central square designed in accordance with the building’s style, while waterfront platforms and wide steps are planned along the river landscape. This orderly and diversified sequence can guide visitors southward into the civic square.

The artistry of the building is fully represented through the combination of decoration and illumination. The ivory white aluminum single-plate curtain wall has given a full play to the building’s purity and plentiful layers. The exterior wall of the theater lounge is decorated with red aluminum tubes of various tint and size, resembling the iconic fluttering sleeves in Kunshan opera, and the wall of the movie theater has a finish of Malay paint coated with stainless steel net. The gradient color of the paint, changing from the exterior tint of red, to the interior tint of blue, has been facilitated with parametric design and has rendered a misty and textile-like effect with the help of specially designed lighting. 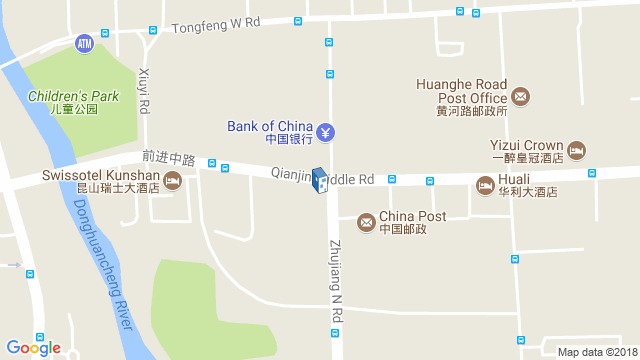 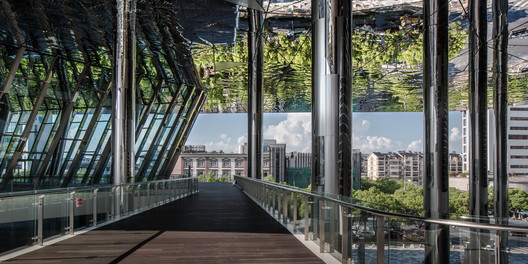 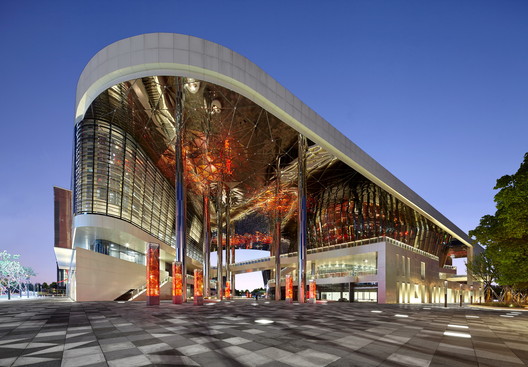