Save
100 Years of Mass Housing in Russia
Share
Or
Copy

Russia’s history of mass housing development can be divided into several distinct periods, each manifested by its own specific type of residential building. These houses reveal what lifestyle, comfort level, construction cost and distinctive traits were considered preferable in any given decade. Every new stage saw its own experiments and had its achievements, which together can be regarded as a line of lessons, discoveries, and experiences, helping to understand a specific character of Russian standard housing.

The October Revolution brought about a number of changes in Russia’s housing policies, defining its development for many years to come. Two decrees of 1918, “On Abolition of Private Property in Cities” and “On Land Socialization,” gave rise to so-called communal apartments. The state-owned property began to account for a larger share of the country’s total housing stock and construction projects; the Soviet regime also took over the task of allocating dwellings among people.

In the 1920s, a new type of low-cost mass housing began to take shape. The Construction Committee of the Russian Soviet Federative Socialist Republic was the first in country’s history to embark on developing a model of a standard house in accordance with modern requirements and with the use of a scientific approach. Among other things, the authorities had held a number of various contests, and these measures eventually resulted in creating fundamentally novel types of homes, ranging from communal houses to so-called garden cities.

According to plan, a local resident could have spent his whole life in this neighbourhood without feeling any need for something outside of it: this place had shops, nurseries, schools, an institute with dormitories, factory, and even a crematory. Khavsko-Shabolovsky housing area was an important part of the district. Its thirteen buildings were situated at a right angle to each other, and at a 45-degree angle to main streets. This feature provided a good lighting, and created a closed yard system. Balconies and bad-sitting rooms both faced southern façades, while kitchens and bathrooms were designed to look to the north. Each row of houses had its own color scheme. Public building was placed in the center of the district.

In the early 1930s, a public contest for the Palace of the Soviets project and a new Stalin’s Moscow city master plan (1935) marked an architectural shift towards exploitation of classic legacy. Moscow city was first to straighten, enlarge and build-up its avenues with solemn ensembles, and then many Russian cities followed the lead. Artistic features in buildings, and for the neighborhood as a whole, became a priority. After World War II, the trend increased; although, multi-story buildings became less common, while wooden construction regained its relevance.

Mastering a technology of manufacturing structure elements at the factory (instead of making them right at the construction site) is a huge breakthrough of this period. But many projects were still being carried out upon their own unique custom design, and this ensured diversity of housing architecture of the time.

1949 saw an introduction of so-called standard planning: this approach completely dismisses the idea of a separate design for each project, and embraces exactly the opposite of that — a design concept which implies working upon standardised housing types and series plans.

On Tverskaya Street, Russia had tried a fast-track (industrialized) construction technology for the first time: a number of teams of workers with different skills shifting from one object to another in rotation, each in charge of his own task.

As a result of the successful experiment, the house number 4 on Gorky Street had been perfectly integrated into the mounting terrain of the road: in all three sections, residential units occupy five stories, but the height of ground floors, reserved for shops and eating places, is different. Basement and portal had been faced with polished granite, residential walls — with prefabricated tile; the interior decoration featured moulding and sculptures.

In the aftermath of Nikita Khrushchev’s landmark speech of 1955 and the decree “On Liquidation of Excesses in Planning and Construction,” Russian housing industry started shifting to much simpler, less assertive architecture — and cheaper construction. Also, it was decided to utilize vacant lands for large low-cost residential neighborhoods — that is micro-districts — instead of proceeding with costly construction in the city center.

Since the rapidly advancing industrial technology suggested uniformity in construction, the custom planning had had to be practically abandoned. In 1959, Soviet Russia established its first DSK — Integrated House-building Factory, and more than 400 such plants were to come along in the future.

To deliver on the promise “For every family — separate apartment!,” the USSR had to build as simple and compact as possible; at the same time, expected lifespan of those structures was estimated to be around 20 years.

K-7 house line delivered the first and the cheapest mass five-story building; it took only 12 days to build such a home. Of course, this type of dwelling had its downsides, such as walkthrough rooms and no balconies. These issues have been revised and fixed for K-7 later versions.

In 1956, the USSR had held a nationwide contest for best projects on cost-effective apartment house types. The experimental 9th Block in Novye Cheryomushki district was planned and a put up drawing on the solutions submitted for this competition. Construction of a novel neighborhood took 22 months; the area had served as a testing ground for 14 building types (each of them used different planning and materials) and is up to five storeys high.

In an effort to make up for small apartments, great emphasis was put on spacious yards. These space were equipped with special leisure zones, playgrounds, landscaping, carpet-beating areas, paddling pools. Architectural planning of micro-districts excluded any through-traffic, and each block had its own nursery, kindergarten, school, canteen, shops, cinema, amenities’ building, telephone exchange, and garages.

During this period, greater focus had been placed on constructing high-rise buildings, as well as introducing improved housing types. This era gave birth to apartments with 1-5 isolated rooms, providing housing for different kinds of families. Besides, certain series allowed for flexible layouts of apartments.

In the late 70s, the housing policy agenda embraced the task of rebuilding and renovating pre-war and early post-war housing stock. Hotels and dormitories accounted for a large part of these new projects. However, housing problems still remain a major concern and a pressing issue. In 1986, with the aim to address this serious challenge, the government adopted a special program called “Housing-2000” — yet it was never fully implemented.

This neighborhood had been made up of 9- and 16-story residential buildings. For the purposes of accessible infrastructure and comfort, the architects decided to arrange entrances to all consumer service facilities in lobbies, or at least within walking distance. Buildings were connected by ground floor halls, therefore it was possible to move around almost without getting outside of the block. With internal passages reserved exclusively for taxi and ambulance, each house came with its own underground parking. The project also offered built-in furniture options, with one of the buildings attempting to perform a duplex apartment experiment.

This phase saw the formation and development of the Russian housing market. The country has witnessed a glorious comeback of both individual development projects and widespread use of décor. There is an ongoing quest for new buildings’ and apartments’ layouts (studios, projects with common neighborhood areas, etc.), — while some housing series already provide options for possible replanning.

Thanks to privatization, Russians have regained their right to acquire and own housing property. This drastic shift is responsible for an important new trend in the Russian housing market. Today, more than 85% of homes are owned by private citizens.

In 1990s, our housing development has been taking rather erratic and unsystematic forms. The industry, largely dominated by infill development plans, saw a significant increase in the share of private and luxury housing. Then in the 2000s, during a period of intense economic growth, it has brought about some large-scale integral development projects for new territories.

In 1997, alongside with a new housing reform in Russia, Agency for Housing Mortgage Lending was created. A year later, the state presented a legal basis for mortgage lending. In 2016, DOM.RF (former Agency for Housing Mortgage Lending) and Strelka KB started to work out a paper called “Guidelines on Comprehensive Development of the Areas” — both parties are driven by their commitment to introduce and ensure a comfortable urban environment in Russia. One of the key ideas of these guidelines is to abandon micro-district development in favour of city blocks.

Initially, Yuzhnoye Butovo and Severnoye Butovo districts were made up of buildings of earlier types, and these homes were mostly intended for and granted to waiting-list households or welfare beneficiary families. Step by step, private construction development has been advancing and expanding — the process accompanied by the introduction of a new modernised planning series. Besides that, in the mid-1990s, Butovos accommodated our country’s first prototypes of a townhouse.

Due to its location far from city center and, thus, a long-distance commute of residents to their workplaces, Butovo district has become a symbol, and a generic term for the so-called “bedroom suburbs” — together with a burden of their distinctive problems: commuter migration, lack of public areas, underdevelopment of small-scale street trading, limited leisure options, etc. 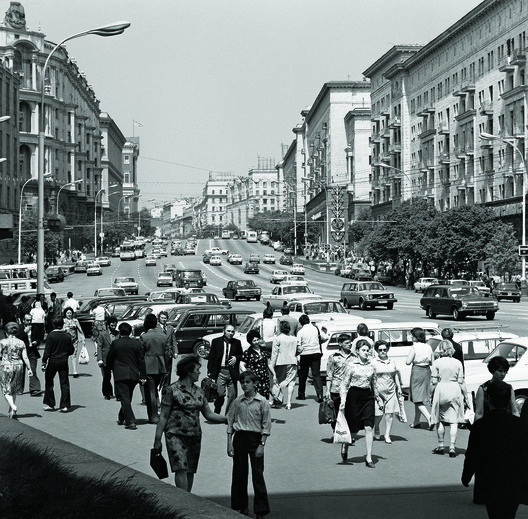