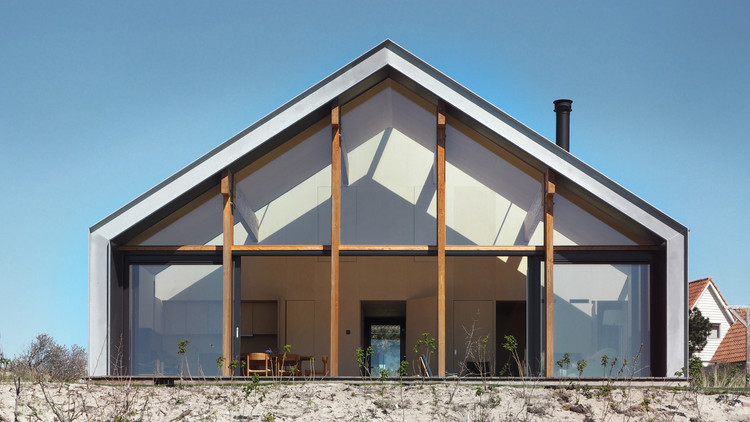 Text description provided by the architects. On top of the Dunes of the island of Terschelling this villa provides a spectacular view over the island and the famous Unesco world heritage Wadden Sea. The villa blends into the landscape, following the soft lines of the surrounding dunes. The villa is divided into 3 areas: a compact zone with facilities, bathrooms and bedrooms, a fully transparent zone that works as a transition area and an open double high living room.

The compact zone is fully hidden behind the so called ‘cupboard wall’. This wall functions like an advent calendar, giving access to secret rooms and functions. From the bathroom on the first floor, for example, it’s possible to open a hatch in the cupboard wall and experience the view across the island and the Wadden Sea while lying in bath.

On the facade this hiding of spaces continues. Hidden shutters can be opened to not only bring light into the 3 bedrooms and showing the main entrance, but also to create new sightlines. When the shutters outside are closed the villa comes a wooden monolith on top of the dune. When all shutters are opened the appearance changes and the villa actively engages the surrounding landscape.

Despite of its limited size the house comes with a surprising number of different routings and entrances. In total there are 6 points from where the house can be entered from the dune landscape and inside many different loops are possible. It’s even possible to loop around the chimney that is integrated in the cupboard wall. The chimney provides sufficient heating for the whole house. Therefore, it wasn’t needed to provide the usual gas connection making the house full electric.

The materialisation has been kept simple. Waxed wood covers the roof and the facade. Inside, birch multiplex covers all the walls. What does stand out are the 4 laminated wooden structural beams and columns. They provide the needed ornaments to give atmosphere to the different spaces they run through.

Because of the absence of building and construction materials on the island the whole villa was fully prefabricated in different segments on land and boated to the island where in no time the segments could be assembled. This not only saved execution time, but also resulted into very precise detailing.