Save
COME! The family is in the yard / Vera + Ormaza Arquitectos 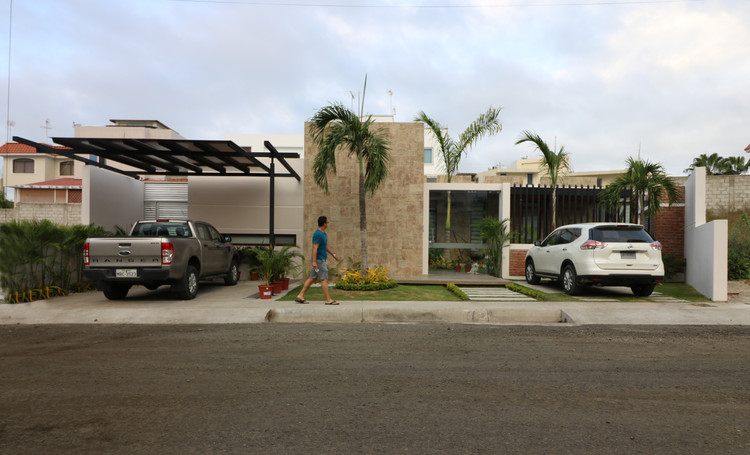 The customer is the concept:
We have been asked to design a single-story home for a family that lived in a building and was affected by the earthquake of April 16, 2016 in Manabi. Under this premise we began to raise the house based on the reactions of each of its members and what they wanted for the family after that fateful date in which many lost their lives and others found in it an opportunity to congregate and value the time between them, enjoying each other and sharing experiences.

The solution:
It was more than obvious for the study that a house should be designed "that has everything" but that it should not be obsessed with areas that were not going to be taken advantage of at every moment of convi-vence in the same, so it would have a compact house, where all spaces were visually related to each other and that were the main link between those who live, those who visit and those who experience housing.

For this, it was decided to visually link the spaces of the composition with the lateral and posterior withdrawals of the lot to give them comfort by means of what is located outside (vegetation, corridors) of what is strictly necessary to the interior, as well as social spaces and privacy They would have a connection between what happens outside and what happens inside, without leaving aside the privacy of them.

But it was not enough to cover the situation of family sentiments that were presented after that earthquake, and the spatial organization of the house around a central landscaped patio, which everyone would see, all would use and all share, was proposed as a solution. thus they would be in contact through it, taking formally the fact that architecture, more than aesthetic and formal, is called to evoke feelings and excite the senses through materiality.

Under this premise, the patio was designed to serve as a multifunctional and multisensory space for the house, so it could be used for tea and reading evenings with friends for the lady, the soccer games of the gentleman, the barbecues between friends of the children, or any other activity that was planned to reunite the family members. Thus, the yard fulfills the function of finding them and with the passage of time to value those activities that use the house as a method to bond, join and feel as a family.

In this way they are organized: the transparent main entrance, showing the reality of the courtyard and its multiple functions, the social spaces are wrapped around the courtyard providing them with not only visual transversality, through large openings floor / ceiling, but also in function, so that the interior spaces use the patio and the patio of the interior spaces. At the intersection of social spaces with private spaces, as an axis of relationship, the kitchen and the bedrooms always in relation to the outside and with palettes of vegetable colors in the windows. A large pergola makes the patio a comfortable stay and contributes to the funtionality of the same providing it with shade and cover.

The materials have been chosen in a way that contributes to the warmth of the spaces, which evoke the feeling of being, of staying, of living. Thus, the wood, the stone, the masonry walls of exposed brick and the warm lighting make the spaces comfortable during the day and at night, thus, the patio is always the extra-functional link of the house and its occupants.

The unexpected architecture:
The house does not hide between blind facade plans, but rather shows itself and its occupants in personality and character, friendly and sociable. The patio ended up linking them not only to the occupants among themselves, but to them with the surroundings, the neighbors, those who pass by and those who stay to chat. Now, sharing as a family or watering the gardens is simply a way of experiencing the home, and with it, the immediate environment of it, something like a family and city home.