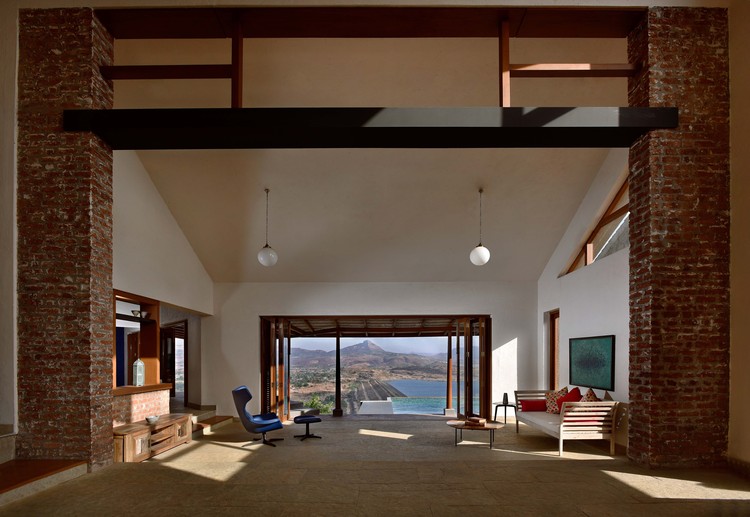 Text description provided by the architects. Famous for its captivating vistas, Pavana is as much a getaway as it is a pristine landscape – with the lake landlocked by the Sahyadris, crowned and guarded by three forts... The family of four sought to discover a weekend retreat as well as a reprieve from the bustling life of the city and hence ventured out in search of a tract of land that would not only capture the essence of the place but could also inspire, delight and satiate their creative endeavors.

Rising high and at the level of the Sahyadris, the story begins where the Five Elements meet - The Earth and The Sky, with Air, Water, and Fire in-between - molded from the earth and open to the vast surround allowing the outside to step in.
“The abode exists in tandem with the elements around it – a subliminal nod to nature itself.”

The textured and subdued wintergreen walls grow warmer in tone under the sun and mimic the tones of the earth; which not only blends in with the landscape but gives the impression of a mass that has grown and emerged from the land on which it rests. The footprint ensures that the site has been altered to a bare minimum. The house rises and falls, following the lay of the land. Each level responds to the contour which gives rise to a dynamic and playful mix of risers and landings - a homage to the hills.

Following the profile of the roofs, large fenestrations bring in daylight and warmth creating a connection with the changing hues of the skies above and a casual reminder of the passage of time. The spaces within the house stay in a constant dance of light and shadow – with light that shimmers and glides along walls and dark patches that spread out across the floor. The elements are allowed to enter and can be seen, felt and heard, enticing the users to pause and constantly explore, experience and live the space.

A simple and earthy palette of materials and tones – limestone (Shahabad & Kadappa), sandstone, slate, teak wood, terracotta tiles, exposed brick, cement plaster, mild steel - complement and respect the site and its surroundings. Taking advantage of the site and the surround, the design evolved from a cohesive single unit to a structure that spreads out in blocks, akin to a jigsaw, with built and unbuilt spaces interlocking to create a whole.

Segregated into numerous zones – the master block, the kid's block, the living block and the guest block – the house takes into account the family’s requirements and their professional inclinations. Each zone spills out into an informal space – the aangan (a small courtyard), the pool, the lily pond – that ensures the continuity and flow of spaces from the interior to the exterior. Conceived as a home for friends as much as it was a home for a family, the 5 Element House is a place for celebrating life itself.