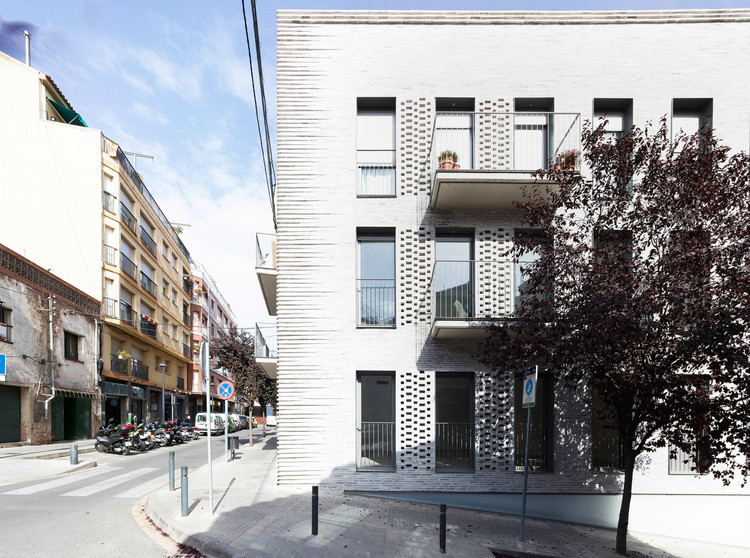 Text description provided by the architects. Avinguda Catalunya 11 is a residential project located in the historic district of Sant Cugat del Vallès, at the outskirts of Barcelona. The client’s idea was to turn the house where she grew up in a special building that could contribute to the image of the neighborhood. The building com­­­­prises ten apartment units and two commercial spaces. As the site is located within the landmarked area, the design choices were made contemplating the construction guidelines’ rigor.

The composition of the façade results from interpreting the proportions and rhythm of the history surrounding buildings, its main elements being the corner and the cornice.  The decision to emphasize thereof derives from studying the old buildings’ tectonic as well as the divorce between the structural elements’ function and their architectural expression, which took place in the 20th century when the modern construction system of slabs and columns came to suppress the use of bearing walls, therefore, eliminating the definition of the corner.

The skin’s predominant quality, its brick language, was attained by drawing a system that set the guidelines for construction, particularly, for the corner’s detail. Starting from the building’s edge, three vertical zones of 50 cm each demarcated the points where the rows of brick projection that protrudes should end and merge with the rest of the façade. The desired organic rhythm is acquired by alternating each row with a projection ending at the first, second or third guide zone. The detail of the project’s masonry aims to create a fading effect that grants dynamism to the corner as well as plasticity to a material that is characterized by its rigidity. The building’s glass base grants lightness, which stands in stark contrast with the heaviness and greyness of the brick.

The building’s materiality comprehends the discrete simplicity of the brick, yet, respectfully suggests elegance and presence amongst the context of traditional local architecture. The handmade bricks amplify the subtle variations of color and texture throughout the changing light of the day as well as recognize the value of craftsmanship. The different brick dimensions, tones, and misaligned joints provide a homogenous, nonetheless, rich surface. The large format of windows permeates the natural light as their frames cast shadow on the façade intensifying the sense of depth. The envelope has a porous nature to help bring light and spaciousness to the interior.

The perforations were a strategy to comply with the limited percentage of allowed opening while adding to the interior experience. To create an interior/exterior relationship the balcony tiles propose a visual continuation onto the sidewalk through the use of the Panot’s Barcelona’s urban tile. The configuration of the interiors consists of open plans with high doors and sliding doors, a framework that permits a high level of flexibility. The clean line of design renders the user the possibility to inhabit and personalize the space.  The common spaces have more color such as the tiles in the lobby and the terrace’s furniture, which have more of a playful character. 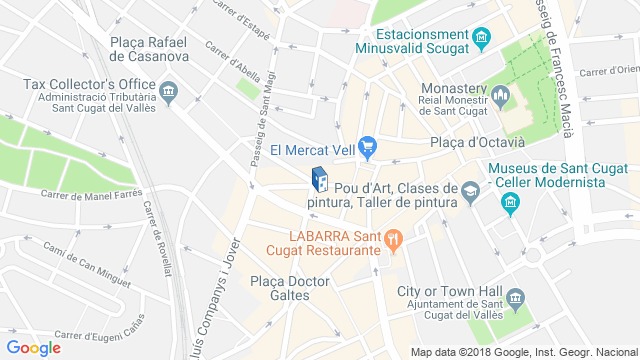 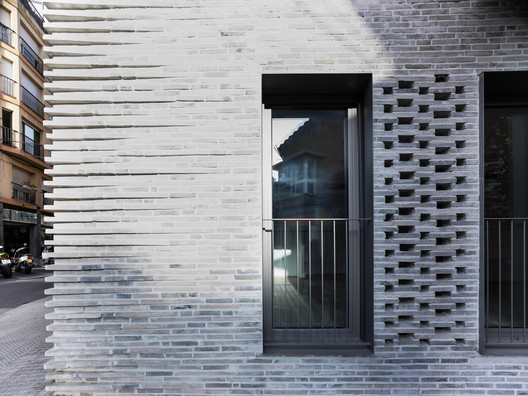