The iconic Vlooybergtoren in Tielt-Winge, Belgium, designed by Close to bone, has been heavily damaged by an explosion. The striking piece of landscape architecture, opened in May 2015, was badly damaged on Saturday night/Sunday morning, as reported by national news outlet VRT.

VRT is reporting that an arson attack was responsible, with Mayor Rudi Beeken stating “there are clear signs that this was not an accident”. 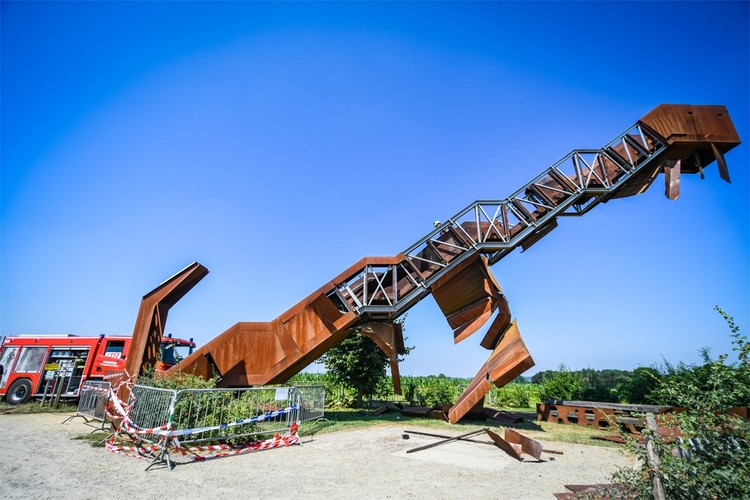 The eye-catching structure has been a prominent tourist attraction for the Flemish Brabant municipality of Tielt-Winge following its opening five years ago. Clad in weathering steel, the stairway tower occupies the site of a former wooden lookout tower which itself was irreparably damaged by arson, and ultimately replaced. The new 10-meter-high tower was designed specifically with vandalism in mind, intended as “a new monumental object that would be able to withstand the ravages of time.”

The local police chief called me from my bed at 3 AM. His people were at the tower and found it was heavily damaged. There had been an explosion; apparently, someone has detonated something at the bottom. It’s such a shame, because just now the summer holidays are starting. I have no ideas why someone could have done such a thing. This is the worst kind of delinquency if you ask me.
-Mayor Rudi Beeken of Tielt-Winge, speaking to VRT

VRT has also reported that restoration of the Vlooyberg Tower could involve a crowdsourcing campaign.

You can learn more about the Vlooyberg Tower from our previous coverage of the scheme here.

News via: Close to bone / VRT

31 Text description provided by the architects. The Flemish Brabant municipality of Tielt-Winge -Belgium has been a place for people to enjoy a striking example of landscape architecture since May 2015. An eye-catching structure that blurs the distinction between a tower and a stairway floats high above the famous Kabouterbos (fairy tale forest) and draws the curiosity of many Tielt residents and passers-by. 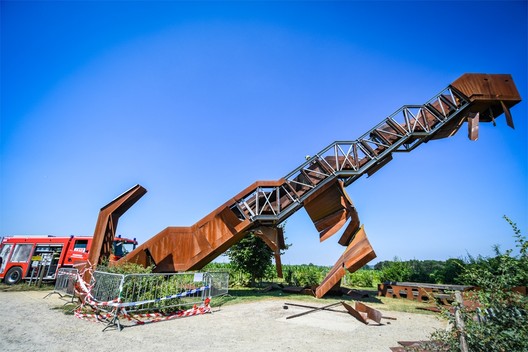