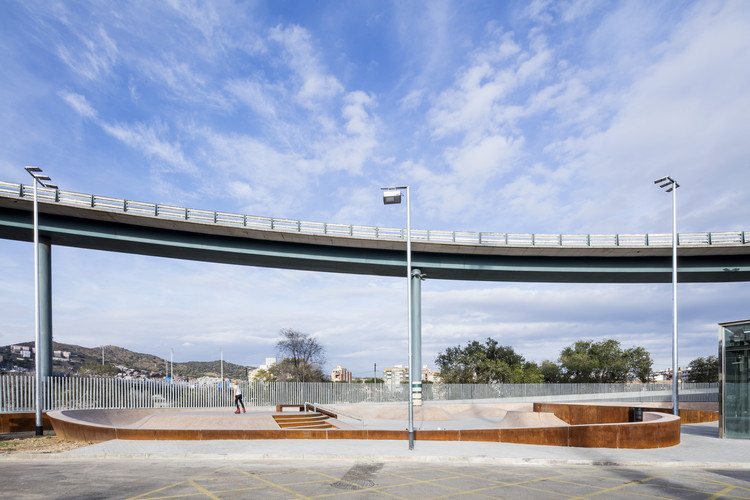 Previous state
The intervention area is located within the Trinitat road junction, next to the Besòs River in Sant Andreu district, in Barcelona. The site is strongly marked by the infrastructures that surround and cross it, at different levels and with different directions. It has a complicated accessibility and this has turned the place into an unknown spot for the neighbors. Mostly, it’s the underground users who to walk through it in order to reach the station access, located precisely in this spot. It had the condition of a residual place. A place that neighbors perceived as an insecure abandoned place, submitted to the speed and scale of the motorway traffic.

Before the project for the sports urban park, the access road to the site was redeveloped with the goal of controlling the indiscriminate parking activity. The urban lighting was renovated and an adjacent space was adapted to hold a little group of urban vegetable gardens. These actions began to slowly change the marginal dynamics of the site. Despite being submitted to the noise and the dominant presence of the large interurban motorways, this site enjoys an infrequent visual relationship with the distant landscape and the Collserola mountains skyline.

Object of the intervention
In order to complete the transformation of the site, the managers and technicians of the Sant Andreu District, the neighbors’ urban commission, and the landscape architects team worked together on the proposal for a new sports urban park. For the past fifteen years, there has been a significant increase in street skating activities in the city of Barcelona. This fact has turned a lot of public spaces into meeting places for the people practicing these sports. Places where exchanges, connections, and social relations take place.

These new rendezvous points, gather both skaters and passers-by, fostering proximity relationships between them. Users are no more just teenagers or adults that resume their hobby, but also children starting to learn and parents accompanying them, as well as an increasing number of tourists that come to Barcelona from all over the world, fascinated by its street style. So the intervention had two main objectives: to revitalize the place and save it from marginality and oblivion, guaranteeing everybody’s right for the use of public spaces and practice of sports, despite their physical and economic status and gender.

Intervention description
This project is part of a net of sports urban parks that have been built all across Barcelona in the past few years. We have conceived this and other parks with the determination of promoting them as truly public spaces and not only as mere skateparks put on a place. In this regard, the integration within the surrounding and distant landscape, the conception as meeting points and the intention of accommodating all kinds of users, ages, and difficulty levels were paramount.

The presence of the motorways, crossing and surrounding the site with largely curved gestures inspired the general geometry of the park. Skaters flow recreating multiple interior circuits that go along with the curved movement of cars and infrastructures, integrating them into a somehow new world of sports and entertainment. It is a multipurpose park with street areas (walls, sloped planes, stairs, stands, platforms, benches, rails…) and other singular elements as the pump track, the sushi plate, the snake run and the iguana tail, which give the park personality and attract users from all around the city.

Final assessment
From the very first opening day, the Baró de Viver sports urban park has become a meeting and a reference point for all generations of users and for all urban sports disciplines. It has revitalized the site and has changed its old marginal condition forever. 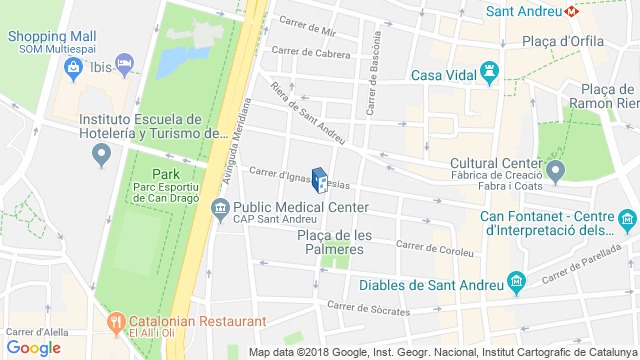 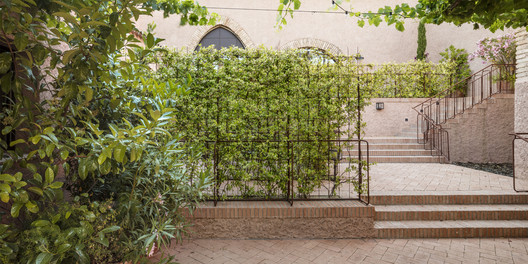