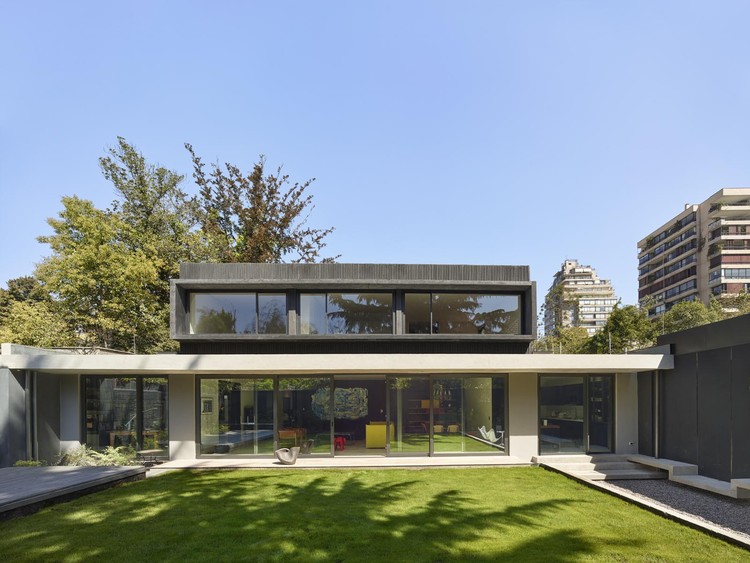 PROGRAM
A one-family house for the parents and 2 children, located in a lot of 17,5 x 27,5 meters and a surface of approximately 484 squared meters in Malaga street, in the suburb El Golf, which is situated in the district of Las Condes (Santiago de Chile).

•Limits of the lot.
The condition of a yard in within the lot, limited by the medians, makes us think into constructing under the premise of “between walls”.

•Orientation and light.
The predominant Eastern-Western orientation constitutes a conditioning to the program. The relation with the street and the frontal yard as an open space that the house must cover.

•The contained space.
The views and owned space. The house established in its first diagram three spaces determined by the depth of the lot: (1) the frontal yard, (2) the house and its backing and (3) the back yard. The space of proximity and distance to determine these limits. And final bring upon a house flexible in relation to its external space.

REFERENSES
In Giorgio Morandi’s paintings proximity and intimacy in domestic objects and the light limits and shadow between volumes, give life to the surface and space. As well, the architecture for this family house is guided to provide quality and space simplicity, and natural lightning to outline spaces and volumes in the inner spaces.

As in Le Corbusier work, this house is understood “as a machine to inhabit”, in terms of being functional and considering internal space with the disposition of furniture and its objects from the beginning of the design.

The house and its interior must act along the measure as a sensor that indicates the relationship between the insides and the outsides. There is no recognizable horizon, just some green that should give the geometry a natural feat, as the enclosed garden in the Petit Maison in Lake Leman.

STRATEGY
The house is conceived to be the imaginary of the dreams, of the living experiences, of the memories of the family members. The house proposes its inhabitance based on three main guidelines:

• Architecture redefines the field:
The house constitutes its borders from the pre-existences that are measurements and materials to contain. The project recognizes this condition and configures the uses to each one of these borders.
The house establishes its own horizon covering the whole site. In the house, there is no recognizable landscape, just a chunk of open space that the architecture constructs as a micro-garden or enclosed garden.
The project establishes as strategy to understand the wholeness of the space, both inner and outer, as active parts of the construction of spaces of the house. The dynamic of daily life and the importance of the garden to it determines multiple circulations in the noble plans, whilst the way to the second floor is guided by a sculptural winding staircase that lead to the private – individual spaces.

• Material and light as a matter of architecture:
The house is also the construction of opposites, solids and voids open in line. Proportions and measurements of the different spaces try to measure the spaces for the everyday, while the use of concrete as main material mediate with the light, gloom and shadows.
Concrete heaviness is enhanced through the integration of dark colors to underscore light and shadows as an intangible material that defines the inhabitance. Thus, the project fixes the limitless of light as matter of architecture, allowing that the solar orientation relate the human level with the divine.

• Opacity and transparency:
The house must speak of densities and matters that are outside it, like when the continent does not transmit an information which is only discover when reaching the insides. The house configures a series of filters that mediate between the insides from the outside. In this way, the house is conceived as a space of intimacy, to that the windows are always mediated by architectural elements that play as a filter and container. Notwithstanding, the inner spaces permit transparency and fluidness the inside and the private outside (the garden).