Save
Olson Kundig Chosen To Design The Bob Dylan Center in Tulsa, Oklahoma
Share
Or
Copy

With construction underway on their renovation of the Space Needle, Olson Kundig will shift their focus to a different American icon. The Seattle firm has unveiled their proposal as lead architect and exhibit designer for The Bob Dylan Center—a new museum that will also house the Bob Dylan Archive in Tulsa, Oklahoma. Sponsored by the George Kaiser Family Foundation and the University of Tulsa, the center is expected to open in 2021, with groundbreaking planned for 2019 in the Tulsa Arts District.

Acquired by the Foundation and University in 2016, the Bob Dylan Archive contains over 100,000 artifacts from every era of the folk legend’s career. When the Bob Dylan Center is completed, the collection will curate exhibitions that include unreleased recordings from both live concerts and studio sessions, Bob’s handwritten notebooks and manuscripts, musical instruments, artwork, photographs, films and more. The collection will also be available for scholarly research, making it particularly accessible for Tulsa University’s Institute for Bob Dylan Studies.

Olson Kundig’s building will be close neighbors with The Woody Guthrie Center, a similar research center and museum dedicated to one of Bob Dylan’s great influences and musical heroes. Guthrie was born about 60 miles from Tulsa, and much of his music dealt with his Okie identity and migration to California during the Dust Bowl. The Woody Guthrie Center opened in 2013 after the George Kaiser Family Foundation and Tulsa University acquired the Woody Guthrie Archive.

The Tulsa-based firm Lilly Architects will partner with Olson Kundig on their design, and Seattle’s Plains of Yonder will contribute to the audio and multimedia experiences in the exhibits. “This is a deeply meaningful project for us,” said firm principal Tom Kundig, “not only acting as architectural support to Bob’s transformational legacy and creative, disciplined force but also in preserving the teaching value of his legacy for future generations.”

Originally a native of Minnesota, Dylan was enthusiastic to be included in Tulsa’s art and museum community alongside his musical inspiration and the nearby Gilcrease Museum’s extensive collection of Native American art. “I’m glad that my archives, which have been collected all these years, have finally found a home and are to be included with the works of Woody Guthrie and especially alongside all the valuable artifacts from the Native American Nations. To me, it makes a lot of sense and it’s a great honor." 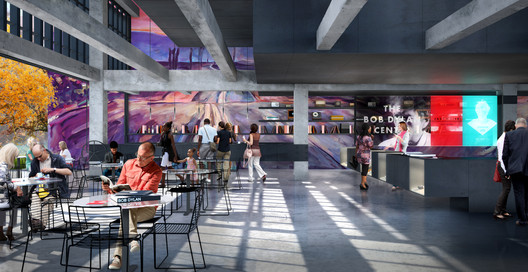