Text description provided by the architects. About three years ago the clients, a family of five, made contact with me. They told me that they were aware of the fact, that the plot they had just bought, belonged to my late grandparents, and that i am an architect. After viewing a few of my works, they have decided to ask for a meeting. In my office, after they have told me about themselves, their children and their wants and wishes from their new home, I shared with them my pleasant memories of my childhood there. I told them that, contrary to other plots, this one is very special to me.

This 1000 sqm. plot was originally for one house only (my grandparents home) and was then divided into two. At the back of the old house, a second one was built. The plot in question is 450 sqm. and situated near the street. After further visiting the place, and a thorough study of the site’s survey map, i came to the conclusion that the best way to position the house will be towards the street in the east and to a walkway in the north. This way i could leave big openings and not lose the privacy of the house. The shape i used was the letter “L”, the inner lines facing north and east looking upon the terrace and the main garden. The outer lines of the “L” will face the entryway to the south, using a non transparent concrete wall to keep it private, and to the west, where a big glass window is overlooking the backyard and  is screened by citrus trees.

The ground floor was planned as an open space, while only the home office, situated in the corner next to the main entrance, is a closed-in area. The first floor has four bedrooms. The master bedroom is located in the front wing and the childrens’ rooms are in the back to create separation.

For the ground floor I chose to use big and wide glass openings towards the front and the back garden and an exposed concrete wall looking over the parking and the entryway. In order to achieve a light look of the house, 6 “H” columns where positioned on the floor, detached from the outer contour. To further enhance the floating effect of the first floor, glass windows are separating the ground floor from the first one. From inside the house there is an unobstructed, open view to the garden and to the skies above the concrete walls. White plaster was chosen to cover the first floors’ facades in order to keep it light. The windows of the first floor where designed as a continuous strip surrounding the floor allowing a panoramic view of the tree tops. Where there are no windows, a metallic clad, in the same color of the windows, is used in order to keep the continuity.

The garden, in contrast to the straight lined house, was planned in a rustic form. The entryway is made of “pixelated” concrete squares with green ivy in between, and fern along the concrete walls. In spite of the large windows, a feeling of warmth and intimacy is kept within. Looking from the street the house looks elegant and simple in a way that enhances its architectural ideas without imposing itself on neighbourhood, not forgetting the famous words: “Less is more”. 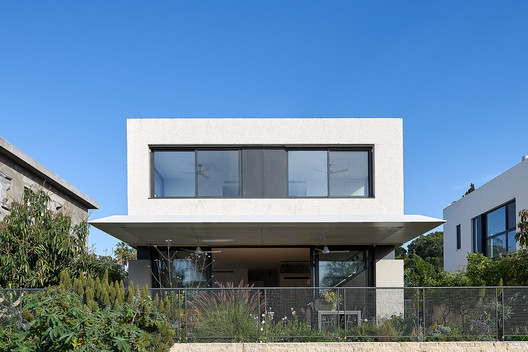