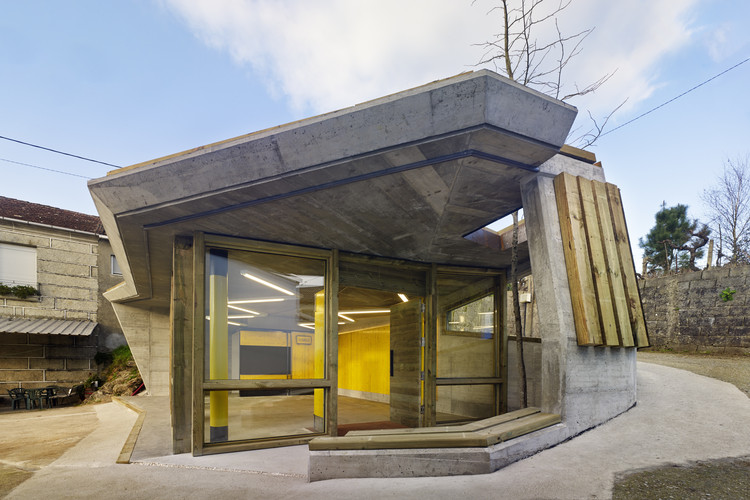 Previous stage
The proposed action aims to recover the old unitary school as a neighborhood center of Noallo de Abaixo.

When the previous building is in a situation of total ruin, with the structure about to collapse, the entire project is reformulated.

On the ground floor a single polyvalent diaphanous room is organized, intended for various activities (lectures, workshops, meetings, meals, courses, etc). In addition to the main room, an area of trade and a toilet adapted to the disabled is defined. This interior area is complemented by the walkable roof as a garden.

For access to the ground floor an exonartex is generated, partially covered, but open. It incorporates a waiting bench taking advantage of a stretch of the retaining wall, like a liquidambar that crosses the building through a roof skylight.

Intervention
The intervention is proposed as an attempt to reappropriation of the public space, opening the views of the building from the upper part of the valley, as well as generating a public plaza-garden on the roof.

The central idea of ​​the project is to give prominence to the church of Noallo de Abaixo, using as a strategy to create a benchmark at the municipal level, a building-plaza that articulates the environment of the place and function as a meeting node and social capacitor.

With the re-dimensioning of the building to be reformed, it is fundamentally that the church regains its leading role in the square, recovering the preponderance that it had originally in the duel of scales.

With regard to the garden cover, a flexible and polyvalent space is sought that, as a spontaneous and alternative occupation of the street, becomes a new option for the different groups, such as young people, women, children, readers, etc.

It is intended to be a porous social container, open, recognizable by the whole community and inviting its entry as a catalyst for different cultural activities.

Description of the intervention

Construction process
Recovering the memory and character of the previously existing building was the starting point of the intervention. The balance between traditional materials and the use of current construction systems was pursued, simplifying the number of constructive solutions to achieve a low cost intervention. From the structural envelope executed, the interior of the neighborhood center was minimally conditioned with little complex and economical solutions.

Structure
The dimensions defined by the retaining wall to the upper road, and the interaction with the houses and the church located in the middle of the square, define the geometry of the exterior walls and the broken roof slab. In the same way, the opening looking for the views, the study of sunlight and other atmospheric agents condition the faceting and the opening of gaps.

Due to the minimal budget that the intervention had, all the structural elements are elements seen. In addition to keeping the roof slab seen without any false ceiling, the retaining walls, and the slab, the shuttering panels themselves have been reused for the execution of joinery and for the paneling of the retaining wall as a vertical covering. For the trade and toilet area, the same type of board for the false ceiling is continued.

This constructive sincerity in terms of showing the supporting skeleton of the building made entirely of reinforced concrete, attempts to qualify with the use of wood for the execution of the facade carpentry and with the use of formwork panels as a paneling in the concrete wall of greater dimension.

Materials
The respect for the original character of the building, clearly marks the choice of the palette of materials, reducing it to the minimum expression and seeking the balance between traditional materials and new materials.
Undressing the building of any superfluous covering is the starting point, to highlight the authenticity of the intervention.

In floors, the concrete slab will be maintained in all the rooms, applying a sealing and a varnishing of transparent epoxy resins matte as protection.

For false ceilings, in addition to showing the slab of broken concrete, the formwork panels for the false ceiling in the service areas are reused.

The exterior carpentry is made with crossbeams and profiles of carpentry of ecological pine.

Furniture and re-use.
To minimize costs in the execution of the work, the shuttering panels are reused in interior coverings and in the furniture designed for the purpose of performance. In the dividing wall with toilet and office a blackboard is placed. For the washbasin and the bowl of trade, the natural iron sheet is chosen for its execution. The countertop of the office is executed with wooden sleepers.

Final assessment
Urbanization and connection to Noallo node. It is intended to open the building to the square, for which pre-existing closure walls are removed, opting for glass facade.

On the roof of the building, we choose the execution of a staircase that allows access to the garden square with views of the valley.

In addition to incorporating liquidambar tree in the entrance vestibule, in the plaza-cover, creeping rosemary, lavender, hypericum, cotoneaster horizontalis and grevilleas are introduced.

This space for community relations is also endowed with a protection handrail as well as residence benches for the neighbors. To hide the evacuation of gases, the duct is covered with a skin of wooden sleepers, with the same execution system as the benches.

For the execution of the roof, it is decided to differentiate between the areas of stay, with a wooden sleeper flooring, of the non-passable areas, where you opt for landscaping, looking for the building to be diluted in the landscape. 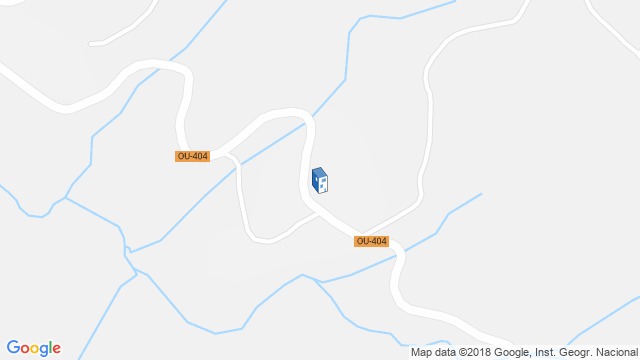 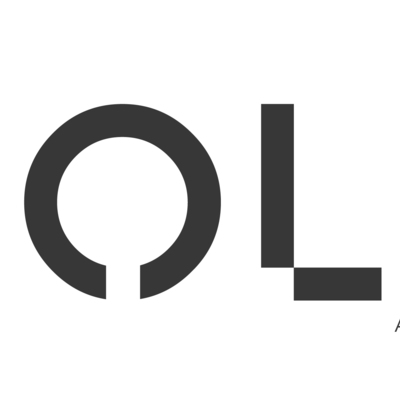 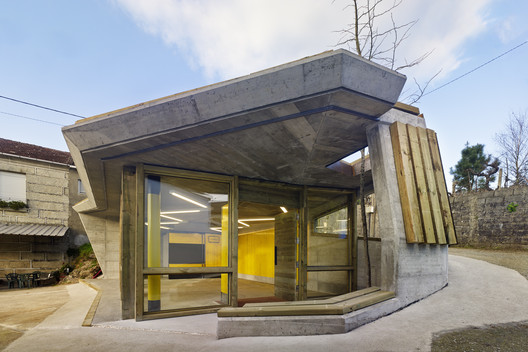