Save
House by the Sea / GERNER GERNER PLUS

Text description provided by the architects. A dream villa created after plans by GERNER GERNER PLUS has taken shape on a park-like plot of land on the Island of Crete.

With the mountains at their back and the sea at their feet, two blocks were arranged in such a way on slightly sloping terrain that the residents are treated to a spectacular 180° panoramic view of the deep-blue Lybian Sea. While one building is intended for guests, situated behind it and somewhat higher is the main building, sixty metres long. The ground plans of both buildings are straight-lined and functionally organised. The living and lounge areas are aligned to face the sea, whereas ancillary rooms and access routes are located in the rear.

Two highlights dominate the grounds: the large-sized pool with outdoor bar and a seating group nearby, also a patio illuminated from above, which is used as a herb garden. Surrounded by stone walls, the plants are protected from strong winds, fine slits simultaneously ensuring sufficient air circulation. The top-class craftsmanship strikes the eye, setting the highest of standards especially in the processing of the stone. For instance, the glass safety barriers were not simply placed onto the stone steps, but integrated into them, and the drain channel crafted in the finest stonemasonry.

Building on Crete
Once a wasteland, now like a paradise garden – but at first it took a considerable outlay to make it viable as a building site. One major issue was the drainage of floods cascading down in heavy rainfall. Building materials were mainly from local sources, hence a large part of the walls is made of a Cretan stone. Despite the mild climate, Austrian standards were priority. Core insulation and underfloor heating ensure warmth and comfort even in the winters, which tend to be somewhat cooler. 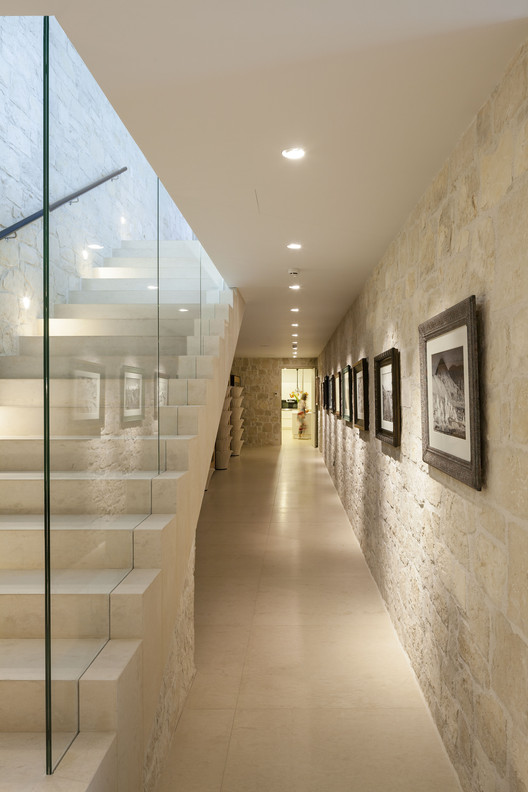