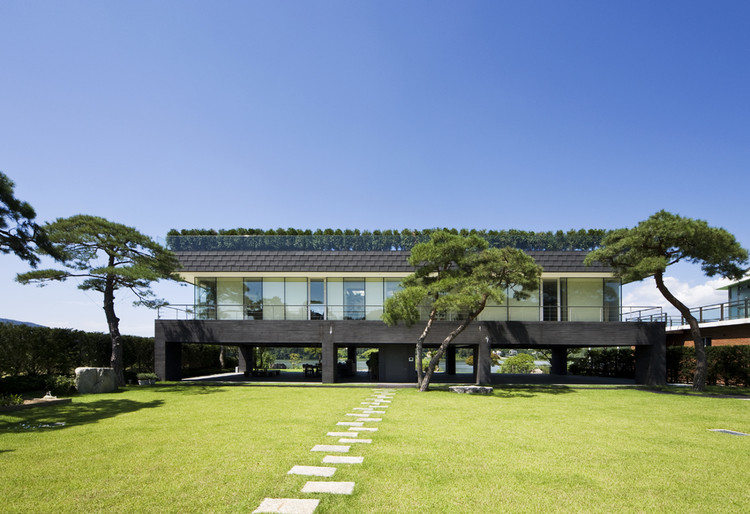 The given land has beautiful scenery facing the Bukhan River in the north. In the meanwhile, lots of restaurants and motels are seen in the south and decadent neon signs are seen from here to here creating visual pollution.

The clients are a couple in their fifties and sixties who run an elegant Korean restaurant which was built in a traditional Korean style. They wanted to build a house for them in the given land about five minutes away from the restaurant. They wanted to overlook the river from a high level, at the height of the third floor. His close Feng Shui specialist had advised them not to make a door facing east and not to let people live in the southwest. They wanted to have a study room, a barbeque place, and a guest house for their daughter’s family who sometimes visit them. They also wanted to make a big yard to play and jump about and a low-leveled swimming pool for their grandchildren. The wife wanted a design that gives a heavy and magnificent feeling.

The house was located in the north as far as it can be for a big sunny yard in the south. The guest house was located in the south so that the restaurants and motels are not seen from the yard. The guest house was built as if it were the fence to be located as far as it can be in the south. It looks like it was put inside the thick fence. To view the river from the yard and the guest house, the main building was leveled up to be a piloti. The roof of the main building was made as a plain roof and there is a roof garden in which people can overlook the river from high level. As a result, the river is viewed from every part of the house.

To make the house look as big as possible, a one meter wide balcony made of the same materials as the main building was built at its four sides. The regulation defines that a balcony with one meter width is not included in total floor area. By doing so, the interior looks as if it keeps expanding when it is seen from inside the building. Also, since all the buildings were lifted from the floor for one floor’s height, the pilotis space could be more expanded. Not to make the pilotis look big-headed like most piloti space with small and minimal columns, the columns were made thicker than necessary and a waterspout was installed inside to make the first floor look like a heavy rock. Black concrete was used for a magnificent style, creating the feeling of tiles used in traditional Korean-style houses. As a result, the house created an image which is similar to the Korean-style restaurant of the clients.

The plan can be described as the “space within space.” The service space, such as a bathroom, a dress room, and a kitchen, was concentrated in the middle and compactly distributed, and a bedroom was placed in the east, a living room in the west, and a corridor in the outskirts. To make people in the house feel the space bigger than real, a circular traffic line was adopted instead of one main traffic line. The circular traffic line was made with a minimum width to differentiate the intensity of space, but the space does not look small because the traffic line extends to visually meet the terrace. Since the stairs that lead to the roof were made as if they were inserted to the second floor, the staircase does not protrude on the roof. The staircase itself plays a role as a well of light, transmitting light to the middle level of the house.

In this house, these kinds of relationships were created through traditional “rooms,” such as living room, bedroom, roof, staircase, kitchen, or bathroom. For example, the study room and the kitchen were divided by a staircase but connected through a small window. The bathroom was connected to the sky through the window at the top and connected to the staircase that leads to the roof at the third floor through the window. Also, a person can look at the river through the study room while he/she is taking a shower or bath. In the living room, there are same-sized windows at the top and bottom to provide a wormhole-like feeling to the parallel structure. Through this mechanism, a visual relationship was formed at each floor. The windows and doors here and there were devised to create more various relationships in the simple mass-shaped house.