Text description provided by the architects. The architecture office heri&salli from Vienna conceived a steel structure similar to a cocoon round a swimming pool in the garden of a private builder-owner in Austria. With mounted panels and interior constructions which are more or less depending on their function the parametric organized spatial element describes possibilities of a usable and experienceable surface.

Proceeding from the task to redefine an existing garden property with view of the lake, and simultaneously create provisions on views and a demarcation in direction of the surrounding properties an neighbors the theme of the classic rustic fence was taken up. In the simplest case a fence functions as protection or demarcation, a visualization of a line that wasn’t visible before. In the further contest it serves as esthetic element or a representative sign and separates as a 2-dimensional element different areas. We formulate the fence based on different requirements as a 3-dimensional description of an existing garden.

The fence itself becomes- proceeding from a diagonal constructional arrangement- therefore a possibility of space. With this in mind it doesn’t demarcate the space, but creates it and renders it experienceable, the function as a demarcation slides into the background and is only a byproduct. The objective of the opening element similar to a cocoon is to create different spatial qualities and experience space. Partly covered, withdrawn and protected, then opening and finally in the middle or in the end in the water of the pool where you can swim out of it. The curves convey a feeling of vastness- make the space bigger than it is-and create in the inside of the house an optimal resonant behavior. Different integrated constructions like stairs, seats, lying areas or a table with backrest and pool covering are in its definition in a geometrical relation with the original construction; they emerge only to become part of the structure again.

The integrated panels follow a dynamic course from the orthogonal edge into the described space, to develop in the central parts in relation to the steel structure from the inside to the outside or to dissolve more and more along the vertical.
In this case architecture is an accumulation of possibilities in a described space and creates only the edges for a vast land in between.

Construction:
The construction of the supporting structure can be described as an overhanging free concave form that is designed as frame construction with diagonally running circular tube profiles for outcrossing and plate attachment. The frames consist of solid welded flat steel profiles. The not entirely closed shell is constructed with diamond shaped plates which are fixed by tabs on the diagonals and in case can be turned around their axis. (Bollinger-Grohmann-Schneider/Wien) 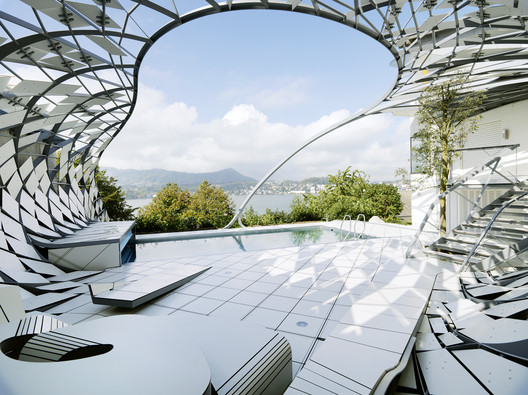