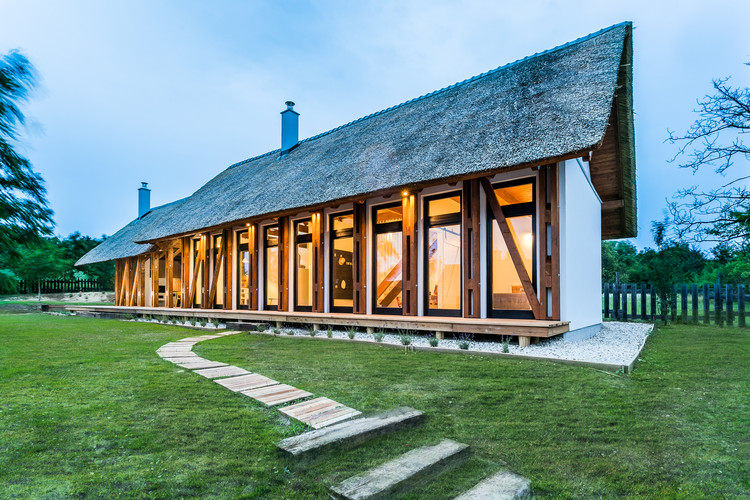 Text description provided by the architects. The primary task of the design was to create a guest house that is connected to the local environment, which provides a native atmosphere by making use of  modern architectural elements. The secondary task was to create a space for the terrace that is in connection with the interior and can be one of the main living areas of the house.  The aim of the geometry and  the materials of the building was to connect the design to the site and create a native atmosphere. We planned to use traditional materials with a modern sense of design. The load bearing  structure is visible on the exterior of the building, that provides rhythm and arrangement to the facade system.

The structural elements are enhanced to serve the architectural concept of the house. The pillars of the structure stand in pairs, with a 1.4 meter axis distance to each other. Between the pillars are the transparent doors and windows all along the facade, providing plenty of natural light to the interior, as well as upholding a continuous connection between the inhabitants and nature.

The main aspect of the design process was to imagine the requested special atmosphere of the building, and at the same time being aware of the strict  local regulations of the Balaton highland area.

The leading themes for the concept were: returning into nature, creating a unique native atmosphere with modern elements. The conceptual phase was developed in collaboration with the owner. The common work with the costumer allowed us to flourish the architectural idea and to develop a system that reflects a unique native resonance.

Some further inspiration of the project was provided by analyzing the architectural archetypes of Balaton Highland, and recognizing the similarity of these forms to Marc-Antoine Laugier's conceptual illustration of the Primitive Hut.    The planned building points out some of the basic elements of architecture: transitional space, covered pathways, the inside and outside, locality, and understanding the relation between nature and man from an aspect of form and construction. 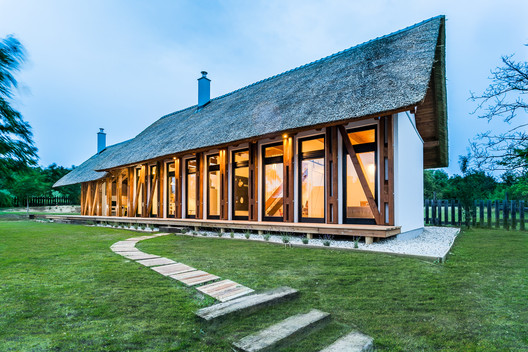