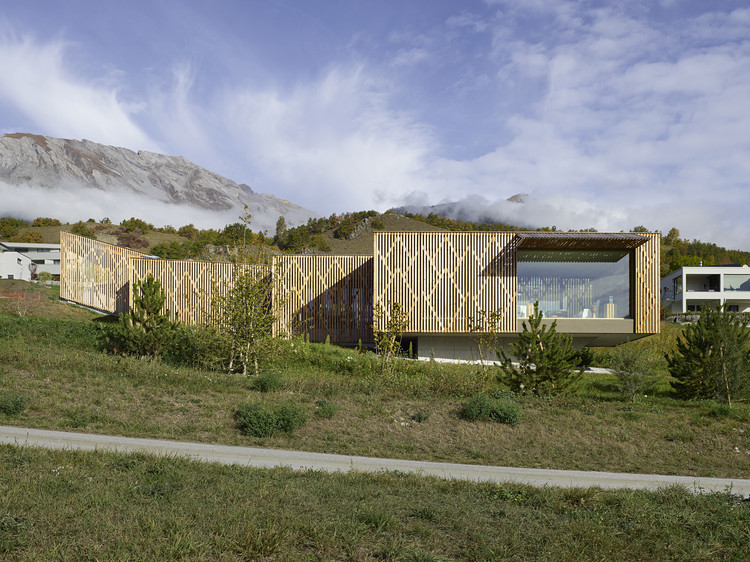 Text description provided by the architects. In the 18th century, a new relationship came about between human society and its environment. The Romantic spirit looked to the mountains to find the sublime, an idea that Jean-François Lyotard defined in his 1984 work The Sublime and the Avant-Garde as “that contradictory feeling - pleasure and pain, joy and anxiety, exaltation and depression”. These words resonate in one’s experience of the site chosen for this family home. The beauty of the view is breath-taking, and the building’s orientation is perfect. Yet its surroundings are marked by the sprawl of buildings typical of many neighbourhoods developing in communes like Grimisuat, close to the well-conserved natural landscapes found at ever-higher altitudes as well as the built infrastructure of the Rhône valley.

To reconcile these contrasting impressions, the project has been finely crafted to create a frame for its inhabitants that magnifies the positives of the site, and eclipses the negatives. Contrary to what one might expect, this outcome has not been achieved by putting the family’s interests above all other considerations. Instead of copying the profile of several neighbouring buildings, with multiple storeys rising from a base to break the line of the mountain slope, the building extends along one level. This arrangement of rooms allows it to extend diagonally with a plan adapted to its topography, while also respecting the overall profile of buildings in the neighbourhood. Instead of competing in height, in an attempt to secure exceptional views, the quality of this project lies in the precision with which the placement of openings establishes a relationship between the exterior and the interior. While the apparent modesty of the house may suggest that it is less comfortable than its neighbours, it in fact offers an uncommon richness of orientations and ambiances, all at minimal cost to its human and environmental context.

The manner in which the slope of the terrain has been interpreted establishes a dialogue between what is near and what is far away. To the North, openings look onto the slope, which acts as a nearby visual screen due to its verticality. The exterior space plays a role much like that of a patio, bringing in light at the same time as it fosters a feeling of protection. Opposite, facing South, one’s view is drawn to an impressive panorama, which is further enhanced by thoughtful framing. Adding to these qualities are the East and West-facing openings, which allow for an interplay of sunlight to animate the space throughout the day. In addition, mobile elements on the façade allow the residents to modulate the light and views at all times.

The use of timber throughout serves to express subtle transitions between scales, contrasting the large and the small, the landscaping surrounding the building, and the monumentality of the Alps. From afar, the house looks old and vernacular, governed by the constraints of an architecture formed and refined by the harshness of mountain life. On the approach, however, the motif of the cladding becomes visible, revealing a building that combines the power of inherited traditions with a project aimed at meeting higher needs. This is achieved through the creation of a living environment that does justice to an exceptional situation. In the interior, the degree of craftsmanship reaches a new threshold, culminating in the attention lavished on the sitting room library.

In this room, the frank juxtaposition of a book collection with the view outside challenges the supposed dichotomy between nature and culture, implying that the coming together of opposites can be a prompt to dialogue. There could be no better summary of the spirit of this project. 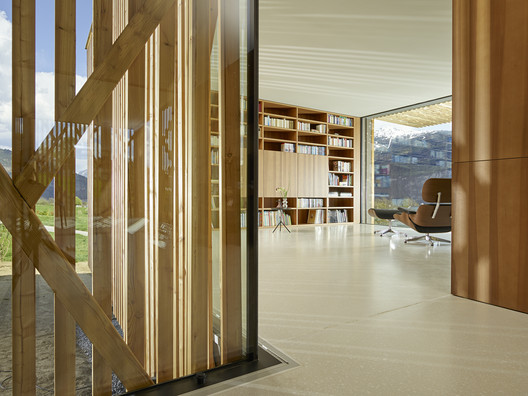 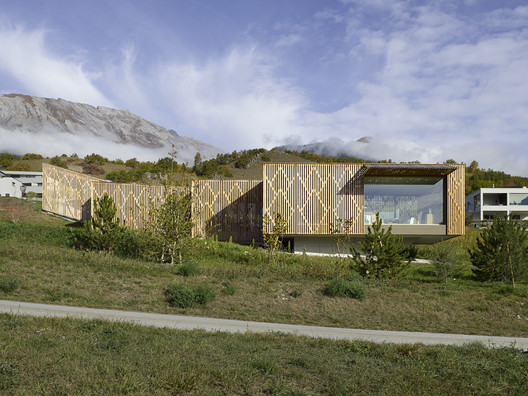