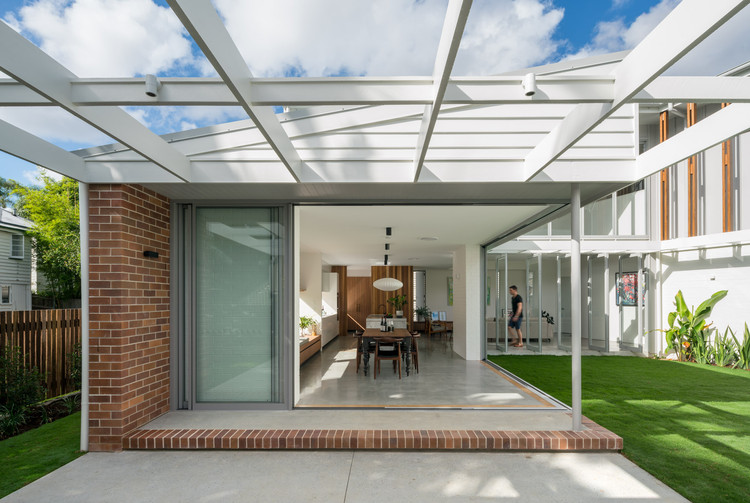 Text description provided by the architects. The project was designed for a builder/developer client, it is a one-off custom designed home. The new courtyard house design replaced a 1960’s brick & tile house, the original house had one redeeming feature; a breeze block screen to the street. This has been recycled into the new design, and also inspired the design direction of the new build to reference the Mid-Century period, particularly the classic examples of homes built in Palm Springs in Southern California during this period.

The developer wanted an exciting and liveable family home that would make the most of the site and location. Taking into consideration the location of the existing tree’s, the sites orientation, topography and Brisbane’s sub-tropical climate. It needed to be open to the outdoors and be centered on indoor/outdoor living. The new house sits on a sloping 582sq.m block in the inner-city Brisbane suburb of Auchenflower, about 4km from the CDB. Auchenflower is known for its character filled, leafy - hilly streets that are lined with Brisbane’s traditional style, ‘timber & tin’ Queenslanders.

Brisbane city council classifies Auchenflower as a Traditional Building Character area. Any new development must be sensitive to the character of the predominant pre-1946 or earlier homes in the area. This is aimed at preserving the ‘traditional character of the locality’. To build a contemporary home in Auchenflower is difficult as council’s guidelines are very restrictive and need to be creatively and skilfully negotiated. In this instance, it was difficult to reconcile the aspirational modernist mid-century aesthetic with the predominant contextual aesthetic of the traditional Queenslanders in the area.

The challenge for us was to design a contemporary home that would also respectfully appropriate the traditional character of the locality. The planning constraints worked in our favor as it forced a development of the design and an approach that may not have naturally occurred without it. The result is that the design of this home uniquely responds to its place in the city of Brisbane and the client's desire to reference Mid-Century design. A clash of ideas that made for a much more interesting and layered response.

At the upper level, the house is weatherboard and fibro clad, much like the Queenslanders in the area and instead of a breezeblock screen to the street (strictly prohibited by BCC in this instance), 2 veranda’s flank the entry, screened with lightweight timber battens, providing privacy and filtering the western sun. The lower level of the house is brick, anchoring it to the site and clearly differentiating the upper and lower levels, another characteristic of the Queenslander. The long horizontal proportion of the upper level sits atop the brick base and appears to cantilever across half the site from the retaining wall that divides the front of the site.

The house is capped with a low pitch tin roof that diminishes to a fine, low and long fascia line across the front of the house, this further enhances the designs horizontality and the fine mid-century lines and proportions. The house is centered around a landscaped, north facing courtyard that includes a pool. A somewhat radical departure from the normal block configurations in the area and the BCC preferred planning model, typically being a house in the center of the block, with generous front and rear setbacks.

All the ground floor living areas fold around the central courtyard and open out to it. The courtyard provides many benefits for the home; bringing northern light and breezes into the interior all day, it is a wonderful, protected landscape for the living areas to open onto, outdoor family life and activities are central to the home and very much connected to the interior, a must for life in Brisbane. Most importantly, the house has a centralized outlook that cannot be built out or blocked. Creating the courtyard was like taking the traditional backyard and wrapping the house around it, so the occupants can effectively live in much closer proximity to it and get much more liveable interaction out of it and have complete control over their primary outlook.

The designs response to the shape of the site created some interesting angles in the house and the sites steep topography demanded the design respond with a dynamic interplay of levels. The flow of the house steps down from the street level to entry level and then down again to the heart of the home, the central courtyard and the key living areas around it. The house has a gross floor area of 400sqm, so it is on the larger side, however, it sits on the site in a very unimposing way as the house is cut into the site, retaining a single story at the street level and stepping down the site to reveal its full height. Basically, this means that what is, in reality, a large house presents itself to the street as a smaller, more approachable and generally nicer little house. 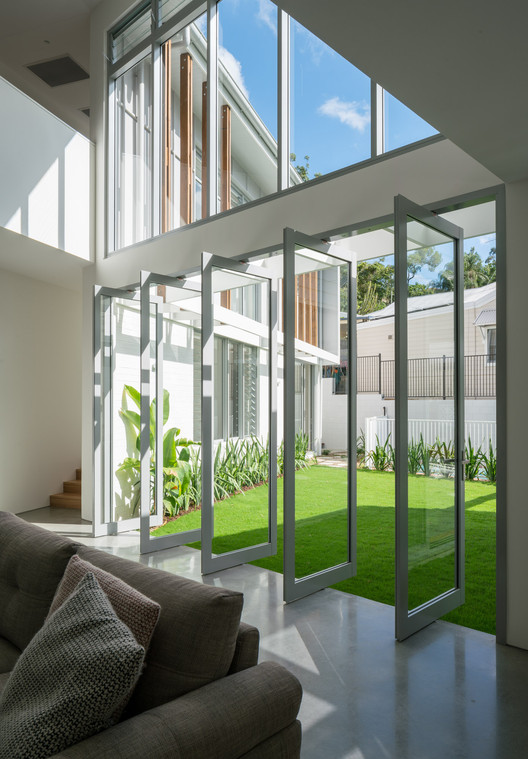