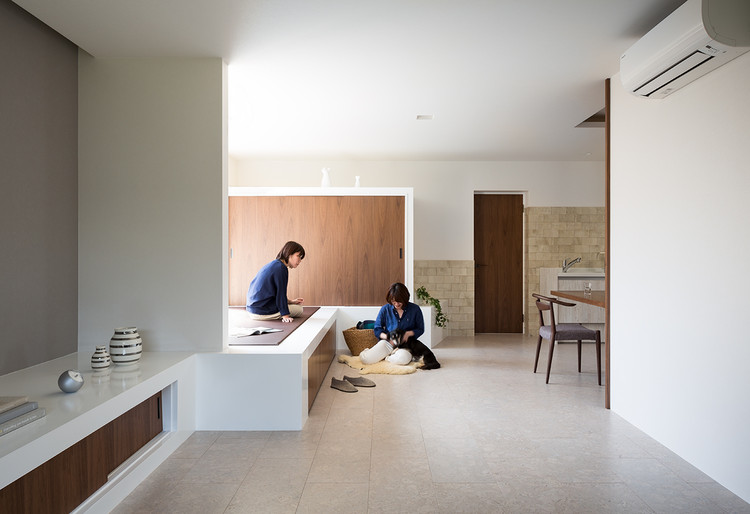 Text description provided by the architects. The project was to renovate a two-story housing that was built 23 years ago. The original floor plan had individual cells and a small living room. The space composed of little compartments evoked a cooped-up feeling.

Therefore, a plan was made to have migration and eyes/traffic consciousness by eliminating unnecessary guest rooms and partitions. The entrance serves as an open dirt floor that connects the terrace with the living  room.

Aiming to expand visibility and living space, a counter and a raised space are put together as a unit that has been built along the living wall.

It is surrounded by a high wall that blocks eyes of the surrounding environment, and is provided with planting that catches eyes of inside the rooms. The terrace, the entrance and the living room are thus rhythmically continued.

On the second floor, the hall has been expanded and a study room newly provided to loosely segment the space.
The space looks calm because of the moderate ceiling height and subdued light coming in. The exposed column in the hall, which was hidden inside the wall before, now serves as an element to produce the space. The home, which has been built over many years, has been now renovated to be the house with potential of space.